FOR YOU, MADAM LENIN is on sale! A novel of the domestic life of a revolutionary 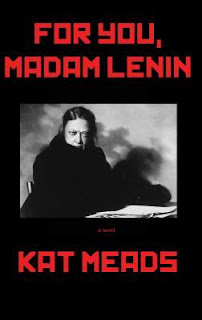 The Publisher Says: Nadezhda Krupskaya, Vladimir Lenin's comrade/wife, was an only child. Where she went, her mother went also. In Siberia and Europe, Lenin and the two Krupskayas shared close quarters: two- and three-room apartments.

Lenin obliged to live with an in-house, sharp-tongued critic, Nadya Krupskaya and Lenin trying to run a revolution while living with mom/mother-in-law, the daily rituals and domestic lives of subversives--fictionally promising territory.

For You, Madam Lenin covers pre-revolutionary St. Petersburg, the Revolutions of 1905 and 1917, and the Soviet experiment post-Lenin. Trotsky with his abundant hair, Stalin with his webbed feet, Lenin's lovely mistress Inessa Armand, and half-blind Fanny Kaplan, Lenin's would-be assassin, are all present and accounted for.

But the novel belongs to the two Krupskayas. In this version of events, the male triumvirate Lenin-Trotsky-Stalin doesn't outshine Russia's long line of tough, resilient, radical female luminaries.

My Review: I like historical novels, I'm interested in Russian history, and I'm culturally in tune with the idea of a husband being the butt of womanly disdain...it's such a common trope, after all. Mothers-in-law don't come much more beady-eyed and observant than Krupskaya Senior.

I don't know that I'd ever so much as given a second's thought to Lenin's domestic arrangements. If anything, I assumed pretty young cadres were at his beck and call. I can't say from my own original research how much of this novel was fictionalized, but I'd certainly say the *feeling* is convincing.

The narrative told from Matushka Krupskaya's point of view is, in fact, charming in its illusionlessness about Lenin's failings as a husband and as a leader. His susceptibility to a pretty Parisian piece, Inessa, surprises his mother-in-law not at all. She admits she thinks Inessa is a lovely, fun girl. But she remains her daughter's mother, so much so that she is Nadezhda's emotional ballast through the inevitable trials of being a famous man's wife. (This part I know to be fictional, as Krupskaya Senior died before the October Revolution.) What impact that has on the power couple, well, three is a crowd didn't become a cliché for no reason.

The other narrative voices, all anonymous omniscient and convenient, are there for the author to offer commentary on the events unfolding before the Krupskayas. It's handy from a plotting point of view, and the "interrogator" of history is at times amusing, but it feels a bit contrived. Krupskaya Senior is telling the story to some unnamed someone, us the readers; the omniscient narrator is too; then the interrogations by History of, for example, Marx's daughters is thrown in, and none of the scenes is terribly long...well, it's choppy out here on this Russian lake.

What sold me on the novel, concerns aside, is the delicate and ever-so-charming arabesque of a life Meads makes for the three women at the heart of things: Mother and confessor, critic and protector, sad survivor and acerbic battler; passionate advocate and wife, lover and beloved, widow and guardian of the flame; and soft, worshipful, accepting refuge for an aging man's sad and defeated needy heart. None of the three can be in any orbit except Lenin's, and in all their actions, they choose this course. They choose to be Lenin's womenfolk. Not because That's What Women Do. Because, first to last, each is committed to the vision of himself that Lenin shows her.

Tart, critical, practical, obsessive, and passionate. Not one of these women is ever less than herself in these pages. That's a lot to say for a trio of wildly different fictionalized people. I'm glad I read it.
Posted by Richard at 4:26 PM