CAHOKIA, or Take THAT Euro-exceptionalists! 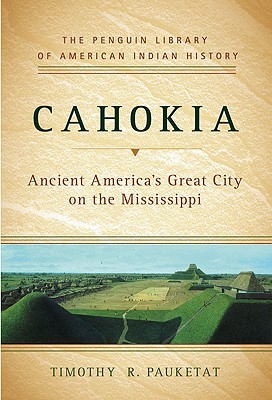 The Publisher Says: Almost a thousand years ago, a Native American city flourished along the Mississippi River near what is now St. Louis. Cahokia was a thriving metropolis at its height with a population of twenty thousand, a sprawling central plaza, and scores of spectacular earthen mounds. The city gave rise to a new culture that spread across the plains; yet by 1400 it had been abandoned, leaving only the giant mounds as monuments and traces of its influence in tribes we know today.

In Cahokia, anthropologist Timothy R. Pauketat reveals the story of the city and its people as uncovered by the dramatic digs of American corn-belt archaeologists. These excavations have revealed evidence of a powerful society, including complex celestial timepieces, the remains of feasts big enough to feed thousands, and disturbing signs of large-scale human sacrifice.

Drawing on these pioneering digs and a wealth of analysis by historians and archaeologists, Pauketat provides a comprehensive picture of what's been discovered about Cahokia and how these findings have challenged our perceptions of Native Americans. Cahokia is a lively read and a compelling narrative of prehistoric America.

My Review: Where today sits St. Louis, Missouri, there once sat a huge Native American city we call Cahokia, absent any other name for it, relating it to a creek that flows through the five-square-mile extent of the known city and suburbs. There are Indian mounds galore here, and there even is a state park over on the Illinois side of the river. Serious archaeology has been done mostly in front of the bulldozers and the plows of farmers, developers, and the highway builders. Pauketat is one of the region's many dirt archaeologists, the guys who go out and trench interesting sites and keep uber-meticulous notes and drawings and samples of stuff. (GOD doesn't that sound like a painful bore?) Thanks to him and his colleagues, we now know that some sort of major urbanization kick hit the area in 1054 and ended in tears about 1250. Why? (On both counts.) Who? What the hell? Those are the questions raised by the archeology, and treated in concise chapters in this book.

I am not joking when I say concise. This entire book comes in at 170pp of author's text, plus 15pp of notes and an index. Not a challenging read, right? Wrong. The information conveyed in these pages, with about the expected level of grace from an academic writing about his pernickety, obsessive specialty, is rich and deep. I found myself taking week-long pauses at times, not "oh god what a slog" pauses but "...wait...what...no...wait..." pauses while my inner Bill and Ted tried to work out the IMMENSE and IMPORTANT implications of what I was learning.

Immense indeed. Native Americans are all-too-frequently hagiogrpahized as natural-world-lovin' harmony seekers. Oh really? Explain then, if you please, the six separate sites with as many as seventy sacrificed women buried in the trenches in front of which they were clubbed to death in this MATRILINEAL society? In ranks, meaning the next row stood there while the first row was clubbed to death. Why did the different-genetic-stock neighborhoods outlying Cahokia show the signs of poor diet and overwork that one expects to see in the lower classes, and that are absent from the downtowners? Why is there evidence from as far away as Wisconsin that the Cahokian religion was being proselytized and effectively forced down the throats of the locals via economic might?

Why are these Living Saints, as many counterculture woo-woos have it, suddenly shopping for shoes in the feet of clay department?

I confess that I am uber-gleeful about this. I do not subscribe to a worldview that, once upon a time, before icky-ptoo-ptoo Men got hold of things, there was a beautiful wonderful peaceful womanly world, and matrilineality is the last teensy vestige of that demi-Paradise. Ha! All these sacrifices, hugely overwhelmingly female, in a matrilineal society? Oh dear, got some blood on those girly-hands, don't we?

I also don't for a second buy the "living-in-harmony-with-Mother-Earth" story either. These folks stripped the local landscape bare and planted what supported their chosen life-style. No European involvement possible. When it all came to a halt, the violence of the Plains eternal wars began, and never ended. Massacres (google "Crow Creek" just for giggles), colonization, oh the fun that people have when the lid of powerful neighbors is lifted...all here, present and accounted for in the archeaological record!

So should you read this book? Not unless you're already interested in archeology. If you're a leftover hippie, it's likely to hurt too much. If you're wanting an overview, this ain't it. Definitely for the serious-minded reader.
Posted by Richard at 8:19 PM