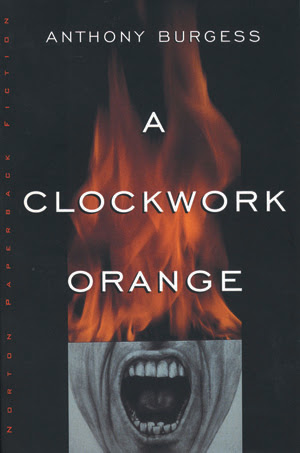 The Publisher Says: A vicious fifteen-year-old "droog" is the central character of this 1963 classic, whose stark terror was captured in Stanley Kubrick's magnificent film of the same title.

In Anthony Burgess's nightmare vision of the future, where criminals take over after dark, the story is told by the central character, Alex, who talks in a brutal invented slang that brilliantly renders his and his friends' social pathology. A Clockwork Orange is a frightening fable about good and evil, and the meaning of human freedom. When the state undertakes to reform Alex—to "redeem" him—the novel asks, "At what cost?"

This edition includes the controversial last chapter not published in the first edition and Burgess's introduction "A Clockwork Orange Resucked."

My Review: I found the slang, "Nadsat," stupid and tricksy. I found the "ultraviolence" almost risibly dated, since I've seen my nephews playing video games more violent than this. I found the prevalence of rape so voyeuristically deployed, so gratuitously hamfistedly bludgeoningly prevalent, that in the end it evoked only a snort of derision from me.

That, in the end, is my problem with the book. Leaving aside the roll-my-eyes-so-far-I-can-see-my-brain nonsense with words, and the novella becomes a pursey-lipped Great Aunt Prudence-shocker, a piece made to play on the fears of right-wing conservative religious nuts and libertarian dupes of the twin perils of Moral Degeneracy and Government Intervention.

I'll give the last words to Burgess, whose response to the book I found on Wikipedia:

In 1985, Burgess published Flame into Being: The Life and Work of D. H. Lawrence, and while discussing Lady Chatterley's Lover in this biography, Burgess compared that novel's notoriety with A Clockwork Orange: "We all suffer from the popular desire to make the known notorious. The book I am best known for, or only known for, is a novel I am prepared to repudiate: written a quarter of a century ago, a jeu d'esprit knocked off for money in three weeks, it became known as the raw material for a film which seemed to glorify sex and violence. The film made it easy for readers of the book to misunderstand what it was about, and the misunderstanding will pursue me until I die. I should not have written the book because of this danger of misinterpretation, and the same may be said of Lawrence and Lady Chatterley's Lover." Burgess also dismissed A Clockwork Orange as "too didactic to be artistic." (emphasis added)