PUBLISHED & PERISHED, a book of writers dishing on their dead colleagues 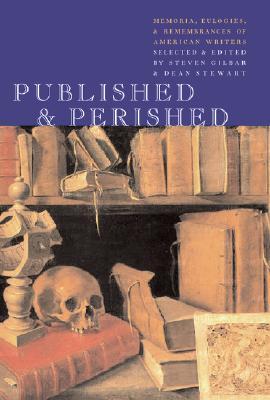 The Publisher Says: We know the names on both sides of these coins; both the authors whose lives are celebrated, and the names of their friends performing the celebration. And what a list it is: Emerson on Thoreau, Henry James on Lowell, Howells on Twain, O'Hara on Fitzgerald, Tate on Eliot, Davenport on Merton, Merrill on Bishop. If there is a published pantheon in which the best of a writer's life and work is recorded for posterity by their closest friends, this book contains the holy scriptures. Here is a selection of well considered (and often shockingly honest) appraisals of the greatest names in American literature memorialized, eulogized, and sometimes criticized by their dearest friends and their closest peers. All are personal; many are poignant and in every case the reader reaches the final sentences knowing far more about the subject than before, not as they would from a scholarly entry in a biographical dictionary, but at first hand, close up, encomia written in flesh and blood.

These memoria consistently manifest an urgency on the writers' part to convey the personal, the intimate, the unknown. Katherine Anne Porter writes of Flannery O'Connor, "I want to tell what she looked like and how she carried herself and how she sounded standing balanced lightly on her aluminum crutches," John O'Hara starts his appraisal of Fitzgerald with the observation, "It is granted that Scott Fitzgerald was not a lovable man, but most of the time he was a friendly one, and that characteristic, in a man of his professional standing, is as much as anyone can ask."

Personal, forthright, and honest, these appreciations sound the notes of our literary past that still resonate in our minds.

My Review: I love browser books. Those tapas of the brain that publishers so seldom do really well, anyway. I like quotes, as I suppose is fairly obvious to anyone who's paid the slightest attention to me, for much the same reason as I like these all-too-rare interesting short-subject browsers: They point me at things I've never considered looking into, and remind me of pleasures I once experienced, and occasionally both together.

An example of the latter is the memoriam piece by Jonathan Yardley of one of my literary icons, Eudora Welty. I've derived huge pleasure out of reading Miss Eudora's stories, and a little less from reading her novels. I've never sought out her essays, for some reason, and now I think I must:

The novelist works neither to correct nor condone, not at all to comfort, but to make what's told alive. ... Fiction writing is an interior affair. Novels and stories always will be little by little out of personal feeling and personal beliefs arrived at alone and at firsthand over a period of time as time is needed. To go outside and beat the drum is only to interrupt, interrupt, and so finally to forget and to lose.

--from "Must the Novelist Crusade?", 1961
Now I must, with almost a starved hunger, seek out and consume these hitherto unsuspected morsels of beautiful writing and clear thought that are Miss Eudora's essays. And all because I am a browser, a grazer, and I buy and hoard these weird collections of odd stuff like the memorial essays written by their peers to recently passed writers.

This sort of book isn't easy to do well because there is so much oddball cultural flotsam around that it's very hard to select a wide, but consistently good, sampling of it. Most often the entries into this genre are single-author collections like 52 McGs or Up in the Old Hotel, both delightful books; but they're one person's work, and therefore a certain level of accomplishment can be expected. How much tougher the task the editors of this volume set themselves, and how much more pleasing the fact that they succeeded.

I want to tell what she looked like and how she carried herself and how she sounded standing balanced lightly on her aluminum crutches, whistling to her peacocks who came floating and rustling to her, calling in their rusty voices.
I do not want to speak of her work because we all know what it was and we don't need to say what we think about it but to read and understand what she was trying to tell us.

--Katherine Anne Porter, about recently passed legend Flannery O'Connor
As beautiful as any sentences Porter ever wrote, or any O'Connor did. A rare pleasure to encounter such a heartfelt and simultaneously a clear-eyed assessment of a person's life and work: O'Connor was defined and consumed by disabling illness, and still had the spirit and strength to stand on her failing legs and whistle for peacocks. Don't know about you, but as a way for someone to remember me, that would make my ghostly ectoplasm glow with pleasure.

So make the effort to find one of these marvelous brain-snack boxes, and dip your weary-of-pretense or simply worn-out-from-outrage toe into a pool of good writing about good, dead writers.