CORAL BONES, being a prose sequel of sorts to The Tempest, the fine late play written by William Shakespeare 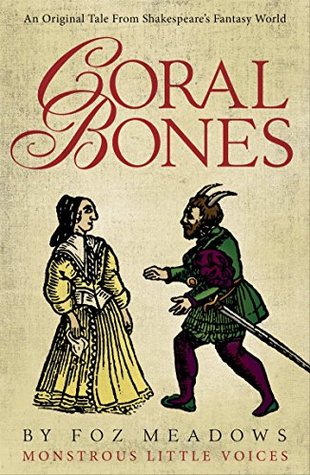 The Publisher Says: Miranda, daughter to Prospero, the feared sorcerer-Duke of Milan, stifles in her new marriage. Oppressed by her father, unloved by Ferdinand, she seeks freedom; and is granted it, when her childhood friend, the fairy spirit Ariel, returns. Miranda sets out to reach Queen Titania’s court in Illyria, to make a new future....

My Review: Probably my favorite of the five novellas. I love the conceit of Miranda finding the life of a wife, after a girlhood and youth free of conventional constraints though rife with unconventional unsavorinesses, to be boring, constrictive, and evoking in her a deep sense of ambivalent unhappiness. I suspect that many folks who jumped from the frying pan of youth into the open fire of adulthood will relate to Miranda's plight and wish for her good fortune in discovering an escape route.

One of Meadows's sinewy strengths is in smithing beautiful, enduring phrases from Shakespeare's native tongue:


Ariel's cure is a nostrum that tastes of moss and sunsets, scratching my throat like swallowed earth. It sits in the core of me like ice, a steady coolth radiating outwards, soothing my fever; soothing me. I stare at the painted angels overhead and wonder how unlike them I must be, that I can leave my father and husband to think me dead.

Words, ordinary words that you and I use every day, seemingly effortlessly placed in a shimmeringly lovely arabesque; the mighty effort it took to bend the armature of thought the words bedizen is unobtrusive. Meadows makes the struggle look easy. That is talent coupled with an iron will and work ethic.

A trend in modern fantasy writing that I find very agreeable is the presentation of faery creatures as truly other, not either Goody Goody or Evil Wicked Mean and Nasty as was the case for so long:


Puck laughs, warm and pealing. "Your concern is touching, but deeply unnecessary. Did Ariel not tell you, child? I'm a trickster, and though my enemies try as they might, it's tricky to trick a trickster with even the trickiest trickeries. And in any case, should anyone try to trick me"--his smile turns vulpine, sharper even than his teeth--"they must do so in the knowledge that I'll trick back."
"A boastful thing, aren't you?"
"Modesty is for saints, which I most certainly am not."
"Indeed? You shock me, sir!"
"Excellent! I do so love to be shocking."

The words flow like cold spring water, deceptive in limpid clarity, hiding a swift current and slippery rocks ready to lift one's feet from their footings and dump the inattentive into an icy bath of surprise: teeth, wits, mind, morals, all are sharp instruments to this ancient, soulless trickster.

I believe that Meadows has speared the wriggling fish of The Tempest's--indeed perhaps all of Shakespeare's works's--essential message, alluded to but never declaimed outright, in this long speech Miran-Miranda (you'll see what this means when you read the novella) makes to Puck as they travel away from Ferdinand and Prospero and the rest of the ordinary (!) world, together:


I am--I know I am new to desire, and all my husband taught me was that wanting should be his province alone, with granting those wants my chore. Certainly, I envied him the decision, but it was not--is not--the whole of it. On the island, there was hardly need to think of myself as girl or woman, except inasmuch as my father told me to, for I had no real source of comparison. Caliban was inhuman, my father defined himself as a sorcerer more than as a mere man, and Ariel could be anything she pleased. But then there was Ferdinand, and for his sake--and for my ease--I took the role I'd been told to take, but though I tried to obey, it was...I wish I could say it was just the skirts, that I chafed only at the expectation of manners, but it wasn't that, Puck, it was language, the words, the feel of them. I never knew words could be so sharp, until the wrong ones cut me. But they weren't always wrong, that's the worst of it; some days I revelled in being called a lady, but then the day would pass, the sun would rise and fall again, and the same name felt like a collar, bringing me to heel; or else a corset, squeezing me into wrongish shapes for the adoration of strangers.
But are they wrong? I still don't know. But, oh, I wish--I wish--I could change as Ariel does, that flicker-flash between girl and man; I wish my form could be all the forms my heart desires! The moon has phases, does it not? We call it full and half and harvest, but through its wax and wane, it remains the moon, and we love it no less--must I be any different? I must not, for I am not. My heart is a moon, and some days I am full and bright within myself, a shape that fits my name, and then I fade, and mirrors show only a half-light shared with a silhouette, an absence my form reflects; and then, in the dark, I am dark altogether, until I regrow again. Why should such a thing be any more difficult to grasp than the fact that some think me dead, and yet I live? The contradiction is only in their perception of what I am; and though killing me would perhaps solve it to their satisfaction, it would not undo the truth of me.

I am struck speechless. I can only say to this eloquent outpouring, "Yes, Foz, yes. You got it. You get it."
Posted by Richard at 9:35 PM