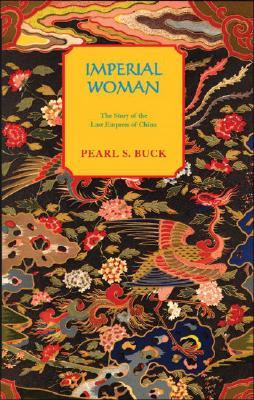 The Publisher Says: Imperial Woman is the fictionalized biography of the last Empress in China, Ci-xi, who began as a concubine of the Xianfeng Emperor and on his death became the de facto head of the Qing Dynasty until her death in 1908. Buck recreates the life of one of the most intriguing rulers during a time of intense turbulence. Tzu Hsi was born into one of the lowly ranks of the Imperial dynasty. According to custom, she moved to the Forbidden City at the age of seventeen to become one of hundreds of concubines. But her singular beauty and powers of manipulation quickly moved her into the position of Second Consort. Tzu Hsi was feared and hated by many in the court, but adored by the people. The Empress's rise to power (even during her husband's life) parallels the story of China's transition from the ancient to the modern way.

My Review: Few women in China's very long history have been as well-documented as rulers as Cixi. I suspect that Mrs. Buck, daughter of missionaries to China and a reluctant missionary herself, wrote of this larger-than-life figure because she felt great kinship with her. Cixi was an outsider in a closed world, the Imperial Court, but whose sterling native qualities gave her tremendous influence over that closed world. Buck was in much the same situation vis-a-vis the Chinese culture she was native to for the first forty years of her life. Her parents raised her to be bilingual in Chinese and English, gave her no model for a racist view of the Chinese, and allowed her to mingle with the children of their Chinese converts to Presbyterianism mostly without interference. This made her a fish out of water everywhere, but also gifted her with an amazing insight into the cross-cultural communication disasters that have plagued China's relations with the world forever.

Cixi was an intelligent young woman of relatively modest, though not humble, birth, gifted with great personal grace and beauty. Her enormous elevation to the relatively modest in Imperial Court terms position of Imperial Concubine afforded Cixi the opening to become a powerful woman; her excellent fortune in giving birth to the Emperor's only son allowed her to move well beyond the considerable but constrained power of a favored concubine/consort into a full governing partnership as a Regent for her son, with a council appointed by her late Imperial master.

Buck portrays Cixi as a schemer, but not a wastrel as she is often portrayed. Her intrigues had at their heart a sincere and abiding belief that dynastic continuity was the sole means by which the Chinese body politic could be served by their government as foils against the colonial depredations of the Western powers. All the pomp and the excess Cixi loved was put on for the demonstration of her dynasty's power and dominance. All the machinations she undertook were meant to keep her position—but so that she might continue to fight against China's diminution and beggarment.

Fundamentally, Cixi behaved no differently than the Communist Party has since Chairman Mao's death in 1976. She was a strong leader, and a flawed person; she was also too late to do much about the long, slow fall of her for of government. History's tides catch up with all governments eventually; the Party's current grandees know this, and are behaving in their stewardship of China as Cixi herself did 125 years ago.

As all Pearl S. Buck novels are, this gracefully told tale is a pleasure to read and a treasure house of outside/insider information and opinions now irreplaceable with the death of the author. It is an exciting story, a well-told tale, and a still-invaluable look into a difficult life lived in service to a misunderstood ideal. A must-read for all Sinophiles.
Posted by Richard at 6:30 AM