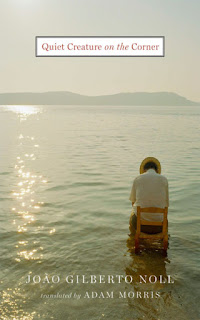 The Publisher Says: When an unemployed poet finds himself thrown in jail after raping his neighbor, his time in the slammer is mysteriously cut short when he’s abruptly taken to a new home — a countryside manor where his every need seen to. All that’s required of him is to . . . write poetry. Just who are his captors, Kurt and Otávio? What of the alluring maid, Amália, and her charge, a woman with cancer named Gerda? And, most alarmingly of all, why does Kurt suddenly appear to be aging so much faster than he should?

Reminiscent of the films of David Lynch, and written in João Gilberto Noll’s distinctive postmodern style — a strange world of surfaces seemingly without rational cause and effect — Quiet Creature on the Corner is the English-language debut of one of Brazil’s most popular and celebrated authors. Written during Brazil’s transition from military dictatorship to democracy — and capturing the disjointed feel of that rapidly changing world — Quiet Creature is mysterious and abrupt, pivoting on choices that feel both arbitrary and inevitable. Like Kazuo Ishiguro, Noll takes us deep into the mind of person who’s always missing a few crucial pieces of information. Is he moving toward an answer to why these people have taken him from jail, or is he just as lost as ever?

My Review: João Gilberto Noll might not be known in the USA yet, but that will change with the publication of this fine novella. It has that certain something, that extra dimension, that comes from a beautiful book being very well translated:


I doubted I'd be able to sleep with a downpour starting to rail against the window, the water blocking my view outside. I thought how my life was really taking its time figuring things out, and my mother snored as if saying don't even start—and there I was, staring at streams of raindrops that wouldn't let me see outside, unable to sleep, without even a way to take a walk in the street due to the rain, so I went to the living room, the light was still on, and I could've stolen my mother's wedding ring right off her finger, and even taken my time rolling out since she wouldn't wake up, but that wedding ring probably wasn't worth a nickel, and I was a coward anyway: I called out to her, asked her to make me a tea because I was feeling woozy, ready to vomit.

And so we're firmly established in the stream of a wastrel's consciousness, a kid whose pointless little life has been spent in a slum without even an idea that he could be anywhere else. In this moment, he is unable to sleep, probably because a short time earlier he forced himself on a young woman from his slum; he is human enough to find this troubling, not quite self-aware enough to prevent this casual, indifferent violation from occurring. Oh, and that mother referred to here? She's packed off to another city before his rape is discovered, and completely forgotten, never even referred to again.

So is this youth merely solipsistic, as most youths are, or is he a full-blown sociopath? This story is about the experience of being unmoored in time, only slightly connected to place, and that solely in reference to an older man's rescue of him from a certain prison sentence. Kurt show up at the courtroom and whisks our narrator away to his country estate, there to be fed and ignored, left to do whatever he wishes to do. He writes poetry, he bangs the maid (consensually), he chats up the handyman, in short his rootless aimless existence doesn't leave any mark on even his, let alone the, world:


I passed Kurt in the hallway, and for the first time he showed me a real smile. What's happening? I wondered. what am I doing that could make him so decisively happ?

The narrator isn't alone in this musing. It is the slightly seasick effect of having no contact with anything real, tangible, requiring effort. There is no reason for Kurt to feel happy with the narrator, and no special reason for him to feel unhappy either. So what is this sudden real smile, this pleasure in seeing, that's all, just seeing, the narrator? It makes the reader as well as the narrator uneasy.

Soon enough, Kurt's wife Gerda needs to go to Rio in order to have her late-stage cancer treated. It is clear to all that Gerda will not be coming home, that her disease has reached its final crisis. Kurt takes the narrator with him to Rio, either as company or simply to have him nearby instead of alone at the estate. It's the slum-born narrator's first time visiting Rio and his first time staying in the brave new world of a luxury hotel:


I ran a hand over my chin, summoned the elevator, the uniformed operator asked me smilingly which floor—everyone was smiling at me in that four-star joint—I remembered I wanted to have a whiskey in the hotel bar, asked for the first floor, the bartender treated me like a prince, yeah, I shaved, I told him, also smiling, a whiskey poured over the stones in my glass, and the bartender saying he hadn't recognized me with my face like a baby's bottom, then turned back to the same chatter as always, recommending where to go later, at night, beaches, bars, women, I barely followed what he was saying, but it pleased me to confirm that someone behind the bar was capable of busying himself with my day's itinerary just because I had the money to pay for the hotel and leave tips.

He has the money? Interesting. Kurt's fortune, most likely Gerda's before Kurt's, pays for the narrator's very existence. Now the narrator has been with Kurt and Gerda long enough that he has assumed the mantle of privilege. How much time has passed since the narrator was bought out of his prison sentence? Unknown. In fact, unknown to the narrator, bobbing as he is in the currents of life and time.

After a deeply discomforting passage where Gerda, in her final moments, mistakes the narrator for Kurt, the surviving pair return to Porto Alegre, there to...well...continue, I suppose, to go on living in their weird ménage. Unknown amounts of time pass before Kurt reveals his true feelings about Gerda's passing and his own aging:


I sat down at the other end of the table and thought, I don't want this: What good did it do me to have him bail me out of jail just to get caught up in illness and old age? First Gerda, then Otávio, and tonight I get home and find him drunk and besides that all rotten, telling me he's not going to die. What do I get out of this?
Or, if I wasn't going to get anything from it, why was he telling me all this? Wouldn't I be better off among the prisoners, who lacked any appetite for reward?

The sheer breathtaking ingratitude of the man! The astonishing, if indulged, self-centeredness! It was here that my opinion of him as a sociopath solidified once and for all.

At the end of the day, I was very enrapt by the tale of our nameless rapist, mostly because he has no sense of himself as a moral actor. He simply does things he wants to do, damn the consequences, and ends up smelling like a rose. It's blindingly infuriatingly unfair, but so is life. Noll's first English-language appearance is a tale of rootlessness, of anomie, and was written about the time the last set of generals were loosening their grip on the country's government. It reflects that moment, the weird and unsettled time between things as they were and as they could possibly be. It's a wonderful story. It will reward your dollars and your eyeblinks.
Posted by Richard at 7:00 AM