MRS. CALIBAN, a sharp and tangy satirical novella with an amazing backhand 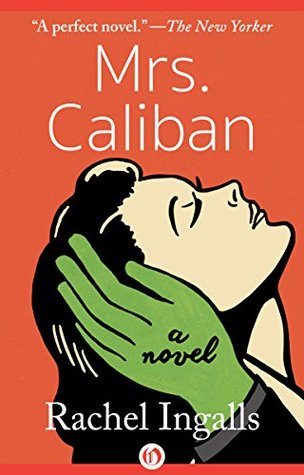 The Publisher Says: It all starts with the radio. Dorothy’s husband, Fred, has left for work, and she is at the kitchen sink washing the dishes, listening to classical music. Suddenly, the music fades out and a soft, close, dreamy voice says, “Don’t worry, Dorothy.”

A couple weeks later, there is a special interruption in regular programming. The announcer warns all listeners of an escaped sea monster. Giant, spotted, and froglike, the beast—who was captured six months earlier by a team of scientists—is said to possess incredible strength and to be considered extremely dangerous.

That afternoon, the seven-foot-tall lizard man walks through Dorothy’s kitchen door. She is frightened at first, but there is something attractive about the monster. The two begin a tender, clandestine affair, and no one, not even Dorothy’s husband or her best friend, seems to notice.

Selected by the British Book Marketing Council as one of the greatest American novels since World War II, Mrs. Caliban is a story of passion and loneliness, love and loss. Wryly subversive, it brilliantly combines surrealism, satire, and the female perspective.

**OPEN ROAD INTEGRATED MEDIA OFFERED ME THIS DRC VIA NETGALLEY**

My Review: I was reminded of why I liked this novel when I first read it twenty-plus years ago:


"Have you ever seen so many tilted mirrors and hidden cameras?"
Gives me the creeps. Really. It's a Presbyterian's dream come true—you know, God sees it all, He's watching you no matter where you are and what you're doing."
"I bet he's really out in the kitchen getting a beer out of the icebox."

On this second reading, in my later fifties instead of middle thirties, I'm still smoothed and soothed by Ingalls's lovely prose and her razor-sharp tongue. Now, however, I see something I missed then: her rage. This is a deeply angry book, and not just on the levels I expected it to be. The passage of those years has taken things away from me that finally showed me the level of compressed outrage that Dorothy, the author's voice, must feel to live through this scene:


...[s]he was halfway across the checked linoleum floor of her nice, safe kitchen, when the screen door opened and a gigantic six-foot-seven-inch frog-like creature shouldered its way into the house and stood stock-still in front of her, crouching slightly, and staring her straight in the face.
She stopped before she knew she had stopped, and looked, without realizing that she was taking anything in. She was as surprised as if she had heard an explosion and seen her own shattered legs go flying across the floor. There was a space between him and the place where she was standing; it was like a gap in time.

Dorothy, average person in average home living under the radar of all the world including her husband, has this vision of a man-thing in the kitchen (her proper realm, being a woman) and doesn't decompensate, throw fits, scream, run...she invites the creature in, feeds him, makes love to him, and builds a life for the first time in many long years.

That takes (metaphorical) balls. What happens as this life unspools takes literal balls.

All in good time. Dorothy and Fred, her husband, haven't been in a marriage for a long time. Their son, Scotty, died several years before; during her grieving for Scotty, Dorothy lost their unborn baby; and, as is so often the case, the parents drift into their own worlds of misery and rage, unable to discover the back passages and sea currents that swept them together before their loss. While a commonplace story, it's not a cheerful one.

So much more cheerful is Dorothy's startled awakening into lust:


She was just beginning to convince herself that down at the bottom of the sea he was hurt or dying, when she saw his shape moving up out of the water. In that light and at that distance, he looked exactly like the statues of the gods, except that his head was slightly larger and rounder than it should be. And he walked with a rounded, swimming motion from hip to knee, holding his large, powerful shoulders and arms easily.

This isn't the way a woman looks at any old man, this is the attitude and the inventory a lover makes of the beloved. It's clear that Dorothy has no sense of wrongness about her six-seven green-skinned frogman lover, she is simply infatuated and lusty.
Posted by Richard at 6:30 PM