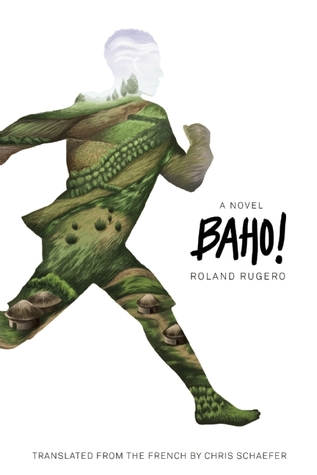 The Publisher Says: When Nyamugari, an adolescent mute, attempts to ask a young woman in rural Burundi for directions to an appropriate place to relieve himself, his gestures are mistaken as premeditation for rape. To the young woman's community, his fleeing confirms his guilt, setting off a chain reaction of pursuit, mob justice, and Nyamugari's attempts at explanation. Young Burundian novelist Roland Rugero's second novel Baho!, the first Burundian novel to ever be translated into English, explores the concepts of miscommunication and justice against the backdrop of war-torn Burundi's beautiful green hillsides.

My Review: A fable of modern life, not just in Africa but the world over: An atmosphere of fear and mistrust arising from more than a decade of endless war causes Nyamuragi (not Nyamugari as above) the mute to be accused of rape, then of murder as the heat of the moment causes passions to rise higher and higher. His "victim" is a teenaged girl who is accustomed (horribly) to the idea that every woman is a man's fair game. She isn't even close enough for Nyamuragi to touch until after she screams, when he grabs her to put his hands over her mouth. The whole village hears the commotion and, being on edge as a whole, assumes that there's trouble and sets out to find the screamer and help her. They see Nyamuragi manhandling their woman-child, assume the worst, and the pursuit begins. Running, of course, makes Nyamuragi look guilty, so the pursuers begin to stone him.

An elder of the village, widow of one of the wealthy men, is out tending her goats when the kerfuffle starts:


With her left eye, the one-eyed woman tries to make out the pack of pursuers.

With the other eye, her bad one, she searches her thoughts. Tears escape them both. It is hard work with sweat trickling down. One eye makes out reality, and the other seeks the explanation for its harshness. One sees, and the other deliberates. The old woman's comprehension in either case is muddled.

Her comprehension about matched mine, as the age of our protagonist Nyamuragi changes from elevn to twenty-six and hovers in an uncertain state from beginning to end. This is intentional, per the translator's note. The author is working in the oral storytelling tradition and piles on details that contradict each other as a means of overwhelming the reader, making the story more intensely alive, and who am I to argue with success?

As the mob drags Nyamuragi towards his death by hanging with a "virgin hemp rope" (this will be important later), the one-eyed old woman hears the word ejo, which leads to her reverie:


Tomorrow and yesterday: two different times, a single word to label them both. Two places in time, a single name. As a result, one becomes the other. Or maybe "tomorrow" and "yesterday" meld into one another, because they contain two chimeras: past and future.

(itals in original)
It seems that Nyamuragi has tried, in his torment, to assent to the mob's mistaken murder of him, to offer himself as a scapegoat for the rage and terror of the whole nation of Burundi, by shouting ego, an assent; since he's been electively mute for his whole life, his vocalization is misuderstood and the crowd roars ejo back at him. They wonder what he means, did he do mischief yesterday or will he if they let him live until tomorrow? In the throes of their rage and fear, they can't decide and no one can agree with anyone else.

Nyamuragi is, in the extremity of his manhandling and torture, driven by his agony to retreat into the waiting state. He's not fully in his body, he keeps blacking out, falling asleep, waking again to be dragged up and up the hill where his village mates are going to hang him from the giant fig tree. His ejo is very much where he is:


In fact, at a very young age Nyamuragi had loved to read, this way of summarizing life with signs. Letters which possessed hats, ties, crooked dashes, feet, arms pointed upwards or turned downwards, hooks above and below, commas, periods, scrawls and scribbles, with the odd one crossed out.

It is always safer, Nyamuragi has learned, to avoid speech and trust silence. Words on paper are blessedly mute. He has emulated them through the horrors of his parents' murders; he has emulated them so well that now he can't summon them despite his great need.

If Nyamuragi had possessed speech, perhaps he would have prayed for divine intervention. He needn't bother, since the divine has already intervened by sending his Uncle Jonathan the demobbed soldier to the village to see his nephew now that the wars are over:


He had served on the frontlines. He knew that tactical decisions win wars. The disorderly two-hundred-strong crowd did not overwhelm him. He knew they were weak. Because he was systematic. And especially because kuvuga menshi siko kuyamara—to speak much does not imply exhausting one's words.

It is Uncle Jonathan who saves the day, and saves Nyamuragi.

This fable of rage, fear, revenge, guilt and expiation, is as relevant to US society as to Burundian. While the scapegoat isn't guilty of the crime of rape, he looks like he is, so he is targeted and the sins of the villagers are heaped on the outsider-from-birth. Mob action might be more direct in Burundi than here, but only just. That the village unites around its young woman and protects her, promises her vengeance, is a refreshing difference from US society's casual, uninterested assumption that the rapist is more "innocent" than the victim. (Typing that sentence nauseated me.)

I recommend to you that, if you read this book (and I think you should), be prepared to do some involuntary soul-searching. How would you have handled the mob rule's decision to murder someone you knew for something you don't know whether or not he did? How would you have tried to comfort the terrified girl whose screams set off the whole nightmare? Would any course of action you can imagine have made any difference?

Only the best books can do this to a reader. This is art of a high order.
Posted by Richard at 6:30 AM