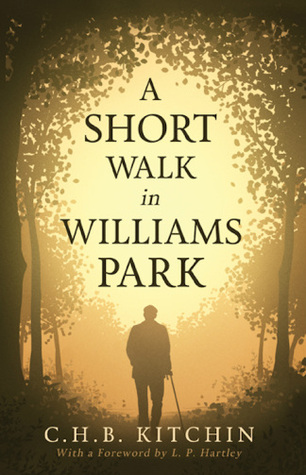 The Publisher Says: Francis Norton is an elderly bachelor who enjoys nothing better than spending a warm day outside in one of London’s parks. When one afternoon he innocently overhears the earnest conversation of two young lovers, Edward and Mirrie, whose relationship is complicated by Edward’s unhappy marriage to a drunken wife, Francis decides to interfere in an attempt to help the pair. But despite his good intentions, his matchmaking efforts have unexpected consequences, and he soon finds himself caught up in a complicated triangle involving blackmail, a mysterious death, and courtroom intrigue. Will Francis’s well-meaning manipulations lead to a happy ending for his two young friends, or will his meddling end in tragedy and disaster?

Found among C.H.B. Kitchin’s papers after his death, A Short Walk in Williams Park was published posthumously in 1971. As L.P. Hartley writes in his Foreword, this short novel has the same distinction of style as Kitchin’s other acclaimed works and displays many of its author’s finest qualities.

My Review: A very short novel indeed, this coda to a fine and distinguished, if unremunerative, career might have been best left in his papers. It's a charming idea, I suppose, but it doesn't develop into much. One is left wondering at the alacrity with which Mirrie rises to catch Francis's fly, how quickly and completely she trusts this stranger, and why in the event George goes along with all of it.

Kitchin's trademark beautiful, precise language is much in evidence; by the end of his career, I suppose he simply couldn't write any other way than beautifully. Lucky us, he's left more novels than just this, and many of those are a bracing, invigorating journey through human nature's many sides. Unless you've read other Kitchin novels, don't pick this one up.
Posted by Richard at 6:30 AM