HOME, AWAY by Jeff Gillenkirk is a four-1/2 star corrective to the woman's point-of-view divorce novel 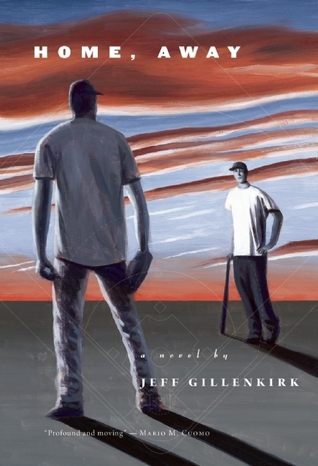 The Publisher Says: How much is a father's love worth? Jason Thibodeaux has a $42 million contract to pitch for the Colorado Rockies and a romantic bachelor lifestyle when the son he lost in a searing custody battle reappears in his life. Home, Away follows Thibodeaux's colorful rise to the pinnacle of Major League Baseball and his agonized decision to quit in the prime of his career to care for his troubled son. Their evolving relationship and resulting confrontations—on the baseball field and off—test the limits of loyalty and the meaning of fatherhood itself.

My Review: I won this book in a LibraryThing giveaway in 2010. I was in a very raw and emotionally vulnerable state vis-a-vis relationships, marriage, parenthood, etc., so my review written at the time reflects that:

It's taken me *weeks* to calm down enough to write a review of this book that didn't amount to a woman-hating scream of fury at the stupidity and unfairness of a court system and a culture that privileges mothers to the exclusion of fathers.

So I don't intend to say a single word about that hugely important part of this novel. I can't be objective in the least on the topic. I limit myself to the broad observation that this is a much needed corrective to the man-bad, woman-good writing that infests family fiction like maggots infest a dead cat.

I can tell you that novels about baseball are seldom so deeply satisfying...a man who pursues his dream to become a major league pitcher, gives it up several times to be a father to his son, screws *everything* up and crawls into a bottle to stop the hurting, and then, and then—well, then a dream beyond dreaming comes true, and it's so wonderfully imagined and so movingly presented that I read the ending three times and cried each one of them.

I doubt a large number of women will read this book because it's so very honest about them, and who wants to read about *that*, right? And it's got LOTS of baseball in it. That's too bad, really. But it is what it is. I am very, very glad Mr. Gillenkirk wrote this book. I truly treasured it. I hope other divorced men, baseball fans, and frustrated fathers will find it.

So that's a quick take on me, my feelings and frustrations, and my misogyny six years ago.

What makes me happiest about this somewhat tough read, due to its subject matter, is that it is the first book I received from Chin Music Press and, in fact, was the first moment I was aware the press existed. I was delighted by the immediate and apologetic way in which the press's representative, David Jacobson, handled a minor issue I had with my first copy's quality: Instantaneous apology and replacement with even more helpings of mea-culpa soothing my ruffled feathers.

No one does that for a nobody reviewer over a truly tiny complaint (pages bound and trimmed oddly, a coffee stain on the front over). I was impressed, I made it my business to poke around their website, and decided I'd order some other books to see what they were up to. I ordered two novels, BUDDY ZOOKA IN THE FRENCH QUARTER AND BEYOND and LAST OF THE RED-HOT POPPAS; and a ghost story, BIG IN JAPAN. All three of these were enjoyable reads, getting three and a half to as much as four stars. (Reviews ill appear when my ancient hard drive renders up its secrets at last.)

Be sure of this: A book with the Chin Music Press logo is a book worthy of your attention, and most probably will, given that attention, become your own for its sheer irresistibility.
Posted by Richard at 4:45 PM