YOKOHAMA YANKEE, the burden and blessing of Being Other in one of the world's most homogeneous societies 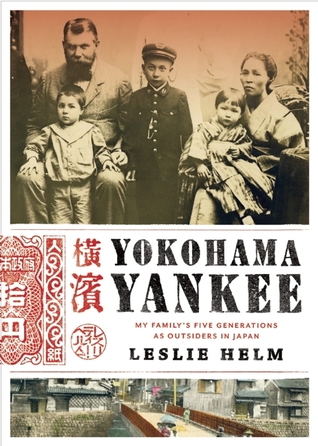 The Publisher Says: Leslie Helm's decision to adopt Japanese children launches him on a personal journey through his family's 140 years in Japan, beginning with his great-grandfather, who worked as a military advisor in 1870 and defied custom to marry his Japanese mistress. The family's poignant experiences of love and war help Helm overcome his cynicism and embrace his Japanese and American heritage.

This is the first book to look at Japan across five generations, with perspective that is both from the inside and through foreign eyes. Helm draws on his great-grandfather's unpublished memoir and a wealth of primary source material to bring his family history to life.

My Review: It's the "to life" part of the book description that I want to discuss. How many of us have family secrets? Okay, silly of me to ask. How many of us wish we could spill the family secrets and get away with it? Helm decides to take a look back at the whole sweep of his German-Japanese-American family's riot of repression and dysfunction so as not to have to write Yet Another Adult Child of Alcoholic Father story. I don't like Helm's father Don, not because he's an alkie but because he's a mean drunk. Got no time for that. Me, I'm a happy drunk, I like to laugh and screw and do pep-u-uppo drugs while drinking. Still not someone who should engender and "raise" four kids as Helm senior did. Or didn't, exactly.

So Helm sets out to put the whole sad affair into a multigenerational context that stops this from being cringe- and yawn-worthy, going into detail about the life of his ancestors in Germany and Japan before and between the World Wars in a well-documented and quite vividly drawn way. It's here that the narrative launches itself into some very interesting territory, and here that the stars are earned. Once we get to Don and Barbara, I don't care anymore because we've heard it all a zillion times and nothing makes this iteration any more interesting than the others were. Leslie and his wife facing racism in Japan was fascinating to me; the sheer incomprehension of Japanese people as to why these weirdos would adopt *strangers* which is to say the children of people they aren't related to makes me a lot clearer on the reason Japan's such a strange place, so much duty and honor and ceremony and so little welcome for the other, the different.

I won't quibble with the odd absence of wartime tales and stories. It's a great deal like Memoirs of a Geisha in that way; a paragraph or two of musings and oh will you look at the time it's 1945! What is it that exerts such a very powerful repulsion on those who write about Japan, let alone the Japanese, when WWII comes up?

This trope, or rather tropelessness, aside, the book is an engrossing and edifying read, and a pleasure to look at, and a very entertaining way to spend a day or so. The photos throughout are well-chosen and the design accommodates them exactly as one wishes all publishers would require it to do. This being a Chin Music Press title, that statement could easily go without saying, but I enjoy saying it.
Posted by Richard at 7:24 PM