ARE YOU AN ECHO? stuns with its poetical economy and perfect pitch 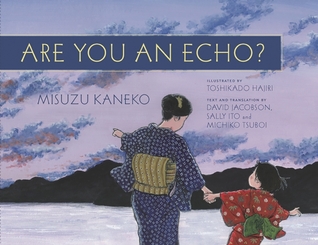 The Publisher Says: In early-1900s Japan, Misuzu Kaneko grows from precocious bookworm to instantly-beloved children’s poet. But her life ends prematurely, and Misuzu’s work is forgotten. Decades later her poems are rediscovered—just in time to touch a new generation devastated by the tsunami of 2011. This picture book features Misuzu’s life story plus a trove of her poetry in English and the original Japanese.

My Review: Whenever a package arrives from Chin Music Press, I know that everything else has to go to the Later pile. As always, I was *so* richly rewarded when I opened these covers.

This gorgeous and extremely touching sampler of Kaneko Misuzu's poetry is perfectly illustrated. It is introduced by a brief recounting of Kaneko's unhappy life. While I would most definitely want my grandkids to read the poetry, I'd want to read Kaneko's story to them, and make sure I was fully present to gauge their need for explanation and/or comfort as the tale unfolds.

Even if you have no kids, grandkids, nieces, nephews, or strange kids you can borrow, buy this beautiful object for your coffee table. You will be the coolest kid on the block. 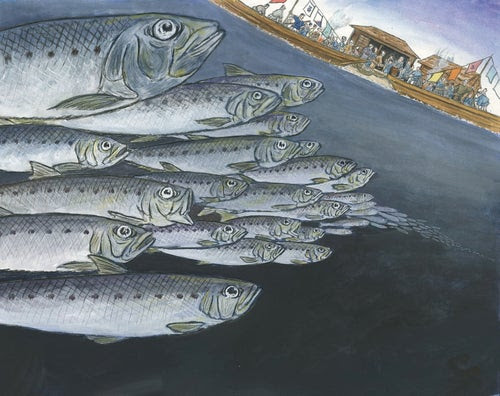 At sunrise, glorious sunrise
it’s a big catch!
A big catch of sardines!

On the beach, it’s like a festival
but in the sea, they will hold funerals
for the tens of thousands dead.