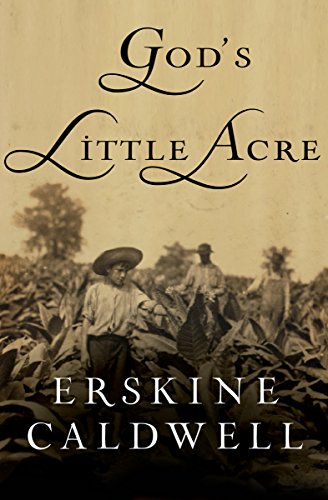 The University of Georgia Says: Like Tobacco Road, this novel chronicles the final decline of a poor white family in rural Georgia. Exhorted by their patriarch Ty Ty, the Waldens ruin their land by digging it up in search of gold. Complex sexual entanglements and betrayals lead to a murder within the family that completes its dissolution. Juxtaposed against the Waldens' obsessive search is the story of Ty Ty's son-in-law, a cotton mill worker in a nearby town who is killed during a strike.First published in 1933, God's Little Acre was censured by the Georgia Literary Commission, banned in Boston, and once led the all-time best-seller list, with more than ten million copies in print. (This is the edition I read in 2012, which has a foreword by Lewis Nordan that I consider very important to read.)

Single father and poor Southern farmer Ty Ty Walden has a plan to save his farm and his family: He will tear his fields apart until he finds gold. While Ty Ty obsesses over his fool’s quest, his sons and daughters search in vain for their own dreams of instant happiness—whether from money, violence, or sex.

God’s Little Acre is a classic dark comedy, a satire that lampoons a broken South while holding a light to the toll that poverty takes on the hopes and dreams of the poor themselves.

This ebook features an illustrated biography of Erskine Caldwell including rare photos and never-before-seen documents courtesy of the Dartmouth College Library.

My Review: First published in 1933, when the author was a mere slip of a thirty-year-old, this novel starts in a hole and keeps digging deeper and deeper. Literally, not metaphorically. Well, literally AND metaphorically.

Ty Ty and his sons are poor white Southern Americans in the grimmest economic times of the 20th century. There was revolution brewing because of the depth of the economic crisis, and the complete absence of any safety net for anyone at all. Ty Ty and his boys, like modern-day conservatives, are digging for gold in their unpromising Georgia home's unyielding land, and finding lots of dirt and not much else. The womenfolk are trying to keep food on the table and as many rapists as possible outside. The ones at home, well, we all have our crosses to bear, don't we?

Since the land's being dug up for gold instead of farmed for food, the boys go off to work in the textile mills. Yes Virginia, there once was a textile industry in the USA. Now it's all in Pakistan, where a couple dollars a month is a (barely) living wage. Mill owners naturally want to keep their costs down to maximize profits, and families are going hungry to make sure the rich get richer (is this sounding familiar?), until the unions come to town. With predictable results.

And what an end! What a beautiful piece of writing this is, and how very grim the picture it paints in its simple shapes and clear colors. There is nothing unclear or muddy about the book, except the minds of the characters, and that is by the author's design.

The search for gold isn't as stupid as it sounds. The Georgia north was Cherokee country until white folks found gold in them thar hills and booted the native inhabitants off the land. In the novel, some few flakes are found, but never enough to do what Ty Ty wants, which is free him and his family from want and dependence on others. It works well as a metaphor for the frayed and threadbare Murrikin dream, too: Keep working keep working keep working and the rewards will (not) come! Or if they come, at what cost, and ultimately to what end?

The title, God's Little Acre, refers to Ty Ty's gift of one acre of his farmland to God to support the church. But because Ty Ty wants gold for himself and his family, he moves the location of the acre at will, so he'll be sure not to give his gold away. Not so unfamiliar here, either, is it?

Murder, betrayal, lust, rage, and that's all before we get to the workplace! Is it any wonder this book was called obscene by the forces of reaction? It *was* obscene! The horrible exploitive relationships in every single nook and cranny of the world the characters inhabit is obscene. The dreadful ignorance, the grinding and maliciously intentional poverty, all of it obscene!

Sadly, with the slow withering of liberalism, the story's outlines are rapidly recrudescing in the modern Murrika being carved from the living flesh of the unwashed masses too drugged on the crack of an American Dream they will never, ever attain by Lotto or hard work or virtue rewarded. The horror is we've been here before, and a few brave and good men tried to steer us away from this hideous abyss. And here we are, back again.

Sick-making, isn't it? Read the book, and use it as a cautionary tale.
Posted by Richard at 5:17 PM