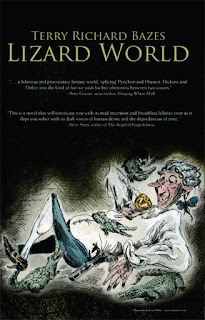 The Publisher Says: A dentist from New Jersey, marooned at midnight in the Florida swamps, makes the mistake of falling into the clutches of a hilariously depraved family of amateur surgeons devoted to a seventeenth century libertine whose discovery of an elixir has kept his evil presence alive for the past three-hundred years.

My Review: Three centuries of bizarro nonsense in the Florida swamps, featuring dentists who rob teeth from cadavers or maps from old ladies, English earls with horrifying maladies, German hunchbacks with one-eyed daughters who give rise to a dynasty of detestable Southern crackers, and a buncha buncha croakadells. (Gators to thee and me.)

Oh, and fiction's only known were-horsefly.

Not a big bizarro reader, me. I wondered sometimes what I was doing wandering in the humid swamps of Bazes' imagination. I found such repulsive images there as people being farmed for their organs, clouds of gator-musk inspiring ick-ptui sex, and a claustrophobic sense on nausalgia vu...the dear and familiar stomach-roiling horror of having been here before...that Florida inspires in me.

So why rate it so highly? Because, dear reader, in an increasingly bland and featureless literary and cultural landscape, where gay couples are the normal ones on TV and wacky neighbors on sitcoms are largely indistinguishable from the leads in a vain attempt to spice things up, Bazes takes us into places we haven't been taken since A Modest Proposal. The adjective "Swiftian" has been waiting for this book for many long, lonely years.

So, go buy it. I promise you no one will fail to remark on the unique cover art, and the erudite among your acquaintance will be gobsmacked by the fact the BARNEY ROSSET blurbed it. (Frankly, after one repugnant scene involving a wire hair brush and the aforementioned were-horsefly, this was the only reason I kept reading.) Oh, so did Charles Palliser and Peter Coyote, but BARNEY! If not for him, we wouldn't have smutty books to read at all!