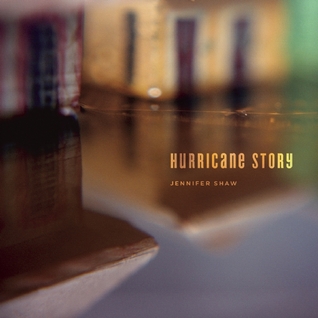 The Publisher Says: Hurricane Story is a spellbinding odyssey of exile, birth and return told in forty-six photographs and simple, understated prose. This first-person narrative told through dreamlike images of toys and dolls chronicles one couple’s evacuation from New Orleans ahead of the broken levees, the birth of their first child on the day that Katrina made landfall, and their eventual return to the city as a family. Shaw’s photographs, at turns humorous and haunting, contrast deftly with the prose.

This clothbound hardcover edition includes an introduction by Rob Walker, author of Letters From New Orleans and former “Consumed” columnist for The New York Times Magazine.

My Review: Very, very pregnant photographer, husband, dogs, and cats, all escape New Orleans barely ahead of Hurricane Katrina. Son is delivered, family is displaced, much of New Orleans is destroyed, to our lasting national shame, and family returns to rebuild and resume living in the place they love and call home. The story isn't new, and it's not the first time anyone anywhere has told it in this words-and-images fashion.

But no one else anywhere has Ms. Shaw's extraordinary and amazing eye; her terse prose style, so beautifully suited to both story and images; or her quite astounding luck in being published by this amazing press, Chin Music via its New Orleans-centered imprint Broken Levee Books.

The book itself is worthy of being purchased simply to put on your front room's most prominent table. It is gorgeous. Bound in real cloth (my dog is still sniffing it, she's never encountered real cloth binding before) which is printed (let me assure you that this technique is far from simple, and its failure rate is significant; the technical demands on the printer, the designer, and the person making the color separations are quite significant; and the aesthetic that demanded this *exactly*right* production is quite rarefied) with an eerie, atmospheric image of great subtlety, the object itself begins its acquaintance with you by offering an uneasy glimpse into the mind of its makers. This will not be a candy-coated, literal, easy-to-process exercise in the journalism of indignance.

Opening the book, one reads the perfectly serviceable prose of two brief essays, one by Rob Walker, a former New Orleanian, and one by Ms. Shaw. Now we are mise en scene (oh, the badness of the pun), and the next page-flip takes you to spread 01: "We left in the dark of night." That's all she says in words. The photo facing the page bears a moment of painful clarity, expressed in a simple image of a red toy truck's tailgate retreating down a highly textured, shining road. The dark world closing in claustrophobically around this single spot of life, vividly red, the beautiful shining cobblestone-like texture of the road, the smoothness of the chiaroscuro...well, I could wax rhapsodic until you beg for mercy, but I won't. No point. Has to be experienced.

The use of toys and models to create the photo story is delightful. If I see one more image of people on a roof waving at the news copter while their house gives way beneath them, I shall scream blue murder. I avoid picture books of 9/11 for the same reason: I can't bear it. I've seen it! I've seen it! Stop smacking me! I won't look! But Shaw doesn't smack me. She wallops me ten minutes after I've seen her images. Dolls, with their awful starey eyes, usually make me uneasy. They still do here, but they are meant to, and they are deployed in simple, uncontrived story-telling, not some absurd, doomed effort to be archly Commenting On Life. The documentary "Marwencol" has much the same effect on me, and the same affect on its medium, as Shaw's dolls do.

And I must mention one thing in particular: Shaw's son is represented here by the King Cake baby. It's a nice, quiet, unpretentious symbol of her son's heritage. To someone without New Orleans knowledge, it's invisible and unnecessary to appreciate the story; to someone who knows what the symbol is, it's poignant and fitting.

Love New Orleans or loathe it, care about personal stories or not, this beautiful object should be in your home if for no other reason than to demonstrate quietly that you have excellent aesthetic taste and a real love for the object we call book. And the best part? It's only $18.