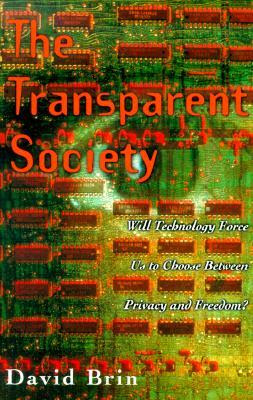 The Publisher Says: �In New York and Baltimore, police cameras scan public areas twenty-four hours a day.
�Huge commercial databases track you finances and sell that information to anyone willing to pay.
�Host sites on the World Wide Web record every page you view, and "smart” toll roads know where you drive.

Every day, new technology nibbles at our privacy.Does that make you nervous? David Brin is worried, but not just about privacy. He fears that society will overreact to these technologies by restricting the flow of information, frantically enforcing a reign of secrecy. Such measures, he warns, won’t really preserve our privacy. Governments, the wealthy, criminals, and the techno-elite will still find ways to watch us.

But we’ll have fewer ways to watch them. We’ll lose the key to a free society: accountability. The Transparent Society is a call for "reciprocal transparency.” If police cameras watch us, shouldn’t we be able to watch police stations? If credit bureaus sell our data, shouldn't we know who buys it? Rather than cling to an illusion of anonymity-a historical anomaly, given our origins in close-knit villages-we should focus on guarding the most important forms of privacy and preserving mutual accountability. The biggest threat to our freedom, Brin warns, is that surveillance technology will be used by too few people, not by too many.

A society of glass houses may seem too fragile. Fearing technology-aided crime, governments seek to restrict online anonymity; fearing technology-aided tyranny, citizens call for encrypting all data. Brin shows how, contrary to both approaches, windows offer us much better protection than walls; after all, the strongest deterrent against snooping has always been the fear of being spotted. Furthermore, Brin argues, Western culture now encourages eccentricity-we’re programmed to rebel! That gives our society a natural protection against error and wrong-doing, like a body’s immune system.

But "social T-cells” need openness to spot trouble and get the word out. The Transparent Society is full of such provocative and far-reaching analysis.The inescapable rush of technology is forcing us to make new choices about how we want to live. This daring book reminds us that an open society is more robust and flexible than one where secrecy reigns. In an era of gnat-sized cameras, universal databases, and clothes-penetrating radar, it will be more vital than ever for us to be able to watch the watchers.

With reciprocal transparency we can detect dangers early and expose wrong-doers. We can gauge the credibility of pundits and politicians. We can share technological advances and news. But all of these benefits depend on the free, two-way flow of information.

My Review: In his blog, Contrary Brin, the author posted a wonderful article called A Transparency Tsunami!, treating the latest advance in malefactor detection--and not coincidentally, social control. It's face recognition technology, using public database images and traffic cameras and surveillance videos from all imaginable public places to build a file of your very own physog. For, of course, your comfort and convenience. After all, you're safer when Big Brother knows where you are, who you're with, what you're getting up to. Right? And, since *you* aren't doing anything wrong, nothing criminal, what's the problem?

Tell that to the cops who come haul you to court for feeding the meter. Tell that to the IRS agent who demands to know where the money for that bracelet you bought at the mall came from when you're behind on your taxes. (And best hope your wife doesn't overhear.) Look (!), they already know what kind of porn you watch via your ISP and even how long it takes you to...get there...since no one watches past the, uh, crisis point. You want them to know you chiseled a Girl Scout out of an extra box of Thin Mints, too?

Brin's point, in this book and in that blog post, is that they know it and they ain't gonna un-know it. He wants our surveillance state, so heartily endorsed by the best Republican president we've had since 1956 by the name of Obama via his reauthorization of the USA-PATRIOT Act, to be looked BACK at: Sousveillance, the only practical protection against surveillance:


The article in the New York Times spirals downward into a list of begged-for impossibilities, never once considering the real issue…which is not how to blind elites (a utopian notion never achieved by any society in history and impossible today, as cameras proliferate faster than Moore's Law.) Rather, the solution is to limit what authorities can do to us with such systems. And to accomplish that, we need only get into the habit of looking back. Of embracing the tech waves and ensuring that no cop, no public official, goes un-recognized, unwatched.

What could be more obvious? To work with tech trends instead of (futilely) against them? But the well-meaning activists, though properly worried, never stretch their minds in a new direction. The only direction that can work.

Contrary Brin 26 September 2013, "Face Recognition Has Arrived...Smile!"
What Brin advocates is NOT LYING STILL, not shutting up or shutting down or shutting out reality, but engaging in the business of being a citizen and calling the Powers That Be to task by doin' unto them others what them others is doin' to you.

I expect that has a familiar ring to it. It's always been good advice. It's never been more crucial to follow.
Posted by Richard at 2:07 PM