ON THE TWELFTH NIGHT, a blazingly creative finish to Monstrous Little Voices 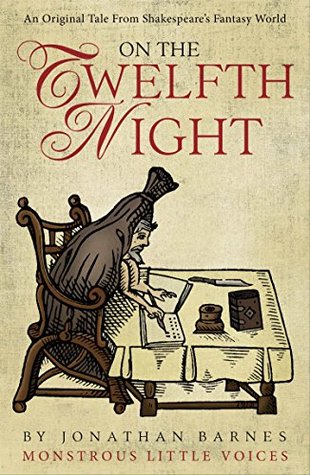 The Publisher Says: Anne Hathaway – contented wife of a glovemaker and aletaster, proud mother of three – has her life turned upside down when strangers, oddly familiar, come to her door and whisk her husband away. What is their business, this terrible danger they say we all face? What is the lattice, and what part must her Will play to save it?

My Review: Imagine yourself in Jonathan Barnes's shoes: you're invited to participate in making an anthology of prose extensions and reimaginings of playwright William Shakespeare's retronymed Tuscan Wars fantasy universe. The editors are hotshots. The publishing house is terminally cool. This sugar/adrenaline bolus would lead any writer to need immediate doses of Ritalin and insulin. Then comes the dose of ricin, the silver hammer this collective Maxwell brings down on your head:

You're wrapping the main narrative thrust that four gifted and talented other authors shaped and directed into a satisfying conclusion, and you're doing it as a response to Twelfth Night.

Holy shitsnacks. *I* can feel writer's block coming on out of sheer terror.

In my review of Adrian Tchaikovsky's EVEN IN THE CANNON'S MOUTH, I called attention to Helena's description of a "place between the pages of the world's book," as a central factor in making all five of these novellas make sense (something modern audiences insist on, silly buggers) as a universe. Clearly I don't know if that conceit is original to Mr. T or if it was part and parcel of the pitch to the authors. I therefore claim no special knowledge of the origins of "the lattice" either. The two conceits seem to me to be different points of view on the same underlying reality. Whoever thought this up, however it was disseminated to the writers, it is a piece of bloody brilliance that knits up many raveled places in Shakespeare's own fictional playhouse-cum-universe. It is, in fact, a small bell-ringer for me as part of the explanation of Shakespeare's troubling and sudden blooming into a major talent from humble, nay untermensch dimensions lowly, beginnings.

And Jonathan Barnes plays it for all it is worth by describing it from the standpoint of the most innocent imaginable bystander: abandoned wife Anne Shakespeare. Oh my, how bold and perceptive a narrative choice. Anne is always, in every imaginable way, the unwinner of every iteration of Shakespeare's fame. Read Robert Nye's take on her, MRS. SHAKESPEARE: The Complete Works. Her fictional memoir is as affecting in its portrayal of a loud, vibrant, lively fun-loving woman as Barnes's is in portraying Anne as a passionate woman in love with a restless man. Both takes, along with so many others written over the course of centuries, require Anne to sacrifice herself to Will's outsized persona.

Only in this novella, an entire playwright's canon of pathos is loaded onto Mrs. Shakespeare's broad shoulders:


Afterwards, they went inside and they sat by the fire and they talked of the life that was left to them, and for a little while, they thought not of the past at all, but only of the future.