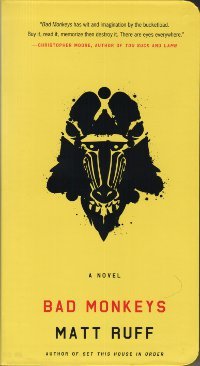 The Publisher Says: Jane Charlotte has been arrested for murder.

She tells police that she is a member of a secret organization devoted to fighting evil; her division is called the Department for the Final Disposition of Irredeemable Persons--"Bad Monkeys" for short.

This confession earns Jane a trip to the jail's psychiatric wing, where a doctor attempts to determine whether she is lying, crazy--or playing a different game altogether. What follows is one of the most clever and gripping novels you'll ever read.

My Review: "Clever" is a good word for this book. In fact, maybe "clever-clever" is better. "Jane Charlotte"? She needs a boyfriend named "Austen Brontë" in that case.

And that is the very last and final connection anywhere within the oddly shaped covers of the book to Jane Austen or Charlotte Brontë. From here on, we're on a profane and sometimes profoundly blue trip through the Halls of Micturation that form Jane's psyche. Is she addled? Drugged? One helluva fast-thinking sociopath, like in The Usual Suspects?

Dunno. About half-way through, I lost steam. See, this is the issue I perceive in so much bizarro/New Weird fiction. It goes on too long. It takes the joke, beats that sumbitch to death, scoops up the jellified meatiness, and then sets to stompin' on it in hobnailed boots. And after a while, one loses the desire to be on the sidelines looking on.

So, a month went by, and I picked the book up again. (It was stabbing me in the kidney as I got into bed one night.) Idly flipping to the Book Dart (if you don't have these, get some, they're amazing), I resumed reading with a slight smothered yawnlet.

And I finished the book, unable to toss it aside for one reason: I had to know how the HELL this guy was gonna get off the horse at the end of the ride.

Good, good job, Sir Matt the Ruff. I did not see that ending happening.
Posted by Richard at 6:30 AM