THE BARROW WILL SEND WHAT IT MAY, second Danielle Cain supernatural investigation 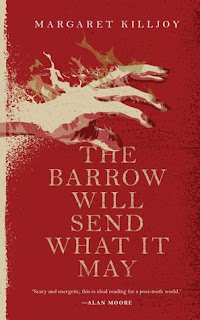 Now a nascent demon-hunting crew on the lam, Danielle and her friends arrive in a small town that contains a secret occult library run by anarchists and residents who claim to have come back from the dead. When Danielle and her crew investigate, they are put directly in the crosshairs of a necromancer’s wrath — whose actions threaten to trigger the apocalypse itself.

I RECEIVED A DRC FROM THE PUBLISHER. THANKS Y'ALL.

My Review: You don't know how good an author's work is until you realize, when reading their new work, that you've missed these characters, this world, this skewed vision of life. That's what happened to me when I finally got around to reading Author Killjoy's latest tale of Danielle Cain and her band of merry pranksters (and now is the moment I say to the spoilerphobic that this next bit is a HUGE HONKING SPOILER for The Lamb Will Slaughter the Lion, which see):
...

...okay, are the spoilerphobes gone? Good. Here's the moment I came home:


A demon killed those police officers, sir. It wasn’t us. They probably shouldn’t have pulled guns out around a bloodred, three-antlered deer with obvious supernatural agility, so whose fault was it really.

That's just effin' awesome. I can't even with Killjoy!

I'm sure I don't need to tell you that the following lines made my evil, withered soul batten like a leech on an artery:


Sometimes I think I let myself become addicted to coffee not because I liked it, not because caffeine did me any favors, but because it takes the urge of a physical addiction to provide any kind of upside to getting out of bed in the morning.

But the story. Yes, the story, the story, one must always serve the story. I found the events of this outing with Danielle and company a little bit on the rushed side, that is, until I realized we're in the same continuum as the last story and the data we need is all going to be relevant one day soon. I liked the new people the group met; I found the Montana setting used more as a form of social shorthand than a background character the way Freedom, Iowa, was in the last book. That it was effective I grant you, since it wasn't until a scene taking pace in Glacier National Park came and went without my so much as smelling a pine tree before I noticed it fully. Prior to that, I had a niggling sense of something not quite full about my cup of story. I understand how little room there is in under 200pp for the author to go hog wild with scenery and such-like. I'd've liked just a bit more, though.

The supernatural elements, the raising of the dead and concomitant magjicqkal spooky do's, the visuals and olfactories that go with, were here in plenty! I was deeply interested in The Killjoy Take on the omnipresent and worn-thinner-than-gossamer zombie trope. I must say it was a relief not to hate it. I was down with the whole idea, the way it's managed, and the fascinating departure from the more...meaty...tone that most fictioneers use in the wake of The Walking Dead.

Most of all, though, I love these stories because Danielle is a great character. She's a traveler, she does not put down roots but instead epiphytically sucks nourishment from the heavy air of mystery and magjicqk that surrounds her and, I think, likely always has. I find her love for another person realistic and well-realized. She doesn't go into frothing fits of adoration but she sure as hell notices when Brynn, her love object from last book, pays a little too much attention to someone new. Yet she's not possessive, really, she doesn't do the victim's-rights polka all over Brynn. After all this is a character who thinks:

Yes. I concur, and like Author Killjoy, I don't limit my sense of being suffocated to my own personal body, but to everyone everywhere.

Should you read these novellas? If you come in with the spirit of adventure and of acceptance for difference that Author Killjoy does. Yes, The Other is demonized...when The Other is an actual demon, or the slave of one. It's the **intent** that Author Killjoy uses to brand The Other. Their appearance, their state of lifedeath, none of that matters so long as one isn't attempting Livingism by radical means of forcing an unconsulted, non-consenting Other to be alive!

You know what I wish more than anything? I wish Margaret Killjoy would get inspired and write some *good* Social Justice Warrior stories of Doctor Who, that's what. The tedious, lumpen things Chibnall and company are turning out, well, just not that good I'm afraid. This book is *good* woke supernatural bloody scary fiction. Find you way to the UK, Margaret Killjoy, just don't forget about Danielle and Scooby-group of Doom! (Would Vulture like that one, or Danielle?)
Posted by Richard at 4:44 PM