THE QUEEN OF ALL CROWS, best steampunky fantasy in a line of them by Rod Duncan 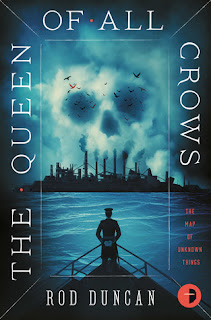 The Publisher Says: Only one woman can stop the world from descending into endless war, in this thrilling return to the world of the Gas-Lit Empire

The year is 2012. The nations of the world are bound together in an alliance of collective security, overseen by the International Patent Office, and its ruthless stranglehold on technology.

When airships start disappearing in the middle of the Atlantic, the Patent Office is desperate to discover what has happened. Forbidden to operate beyond the territorial waters of member nations, they send spies to investigate in secret.

One of those spies is Elizabeth Barnabus. She must overcome her dislike of the controlling Patent Office, disguise herself as a man, and take to the sea in search of the floating nation of pirates who threaten the world order.

My Review: It is not necessary to read the first trilogy featuring Elizabeth Barnabus to appreciate this novel. It would add incalculably to your pleasure in the read, but it isn't necessary.

The plot picks up where The Custodian of Marvels leaves off. Julia has vanished after embarking for America, there to join her hard-won happiness with husband Richard in his law firm's Patent-law practice there. Julia will make herself a new life by studying Patent law at Columbia University. All of that struggle and fight is now gone for naught with her airship's disappearance. Her bestie and earliest supporter Elizabeth is on the hunt for her at great personal cost. It seems, as of now, that Elizabeth's main supporter and illicit lover, John Farthing, has lost her via her betrayal of his trust as well as her disappearance.

For someone who picked this book up because of its terrific cover art, this should be enough: the friendship between the women is explicitly made the stakes of the story within two chapters. Possibly the most intriguing idea in the series is the existence of the International Patent Office. Those who have read The Fall of the Gas-Lit Empire may read the spoiler below:
*
*
*
*
*
Elizabeth's journey from Patent-Office battling terrorist to one of their own is a delightful part of that series's arc, and the basis for this series's stories. In these tales we will follow the intrepid, genderfluid Elizabeth as she resumes her part-time identity as her own brother in service of, not in fleeing from, her former enemy-turned-employer the Patent Office. That by itself would make this an astounding series to follow. But the stakes are far greater than merely serving those that Barnabus once despised. Mr. Barnabus is outed as Miss Barnabus memorably and completely for the duration of this book's search for Julia when we discover the truth of a tall tale of sea monsters eating ships.

The action of the story is set largely among the all-female pirate society, the Sargassans, operating in the North Atlantic Gyre. It's a world constructed around the Unicorn, which name made me snigger as I realized it was chosen to be the center of an all-female society. But I show my juvenile sense of humor. The novella-length time we're aboard the constructed world of the Sargassans is spent politicking and coping with human nature's ickier corners. Women, it turns out, do much as men do when left to rule themselves. I wonder if this is, in fact, true; I don't know how much of the world is based on women being women and how much on women reacting to the male-dominated world they hated enough to run away from. I suspect the truth is the latter by Author Duncan's design.

Now the design itself becomes an issue. This is the first book of a trilogy, whose second book has only recently appeared. The ending of this book's two-fold story is complete only on one strand, and that dangling second strand is going to itch and niggle the entire time we're embarked on a new quest in Elizabeth's emotionally battered and physically exhausted condition. The ending of The Queen of All Crows will not resolve the Barnabus case internal to the International Patent Office. It is clear that echoes of "O brave new world..." in the ending are not accidental. And with it, the opening of vast new vistas and fresh perspectives on the Gas-Lit Empire.

Because the action of this book, airship crashes and pirate republics and long sea voyages, all takes place in 2012.