THE WRONG STARS, first of a series I like better and better as I read along 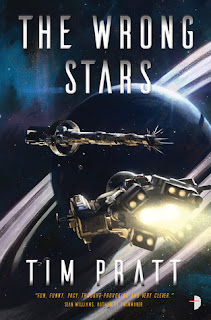 The Publisher Says: A ragtag crew of humans and posthumans discover alien technology that could change the fate of humanity... or awaken an ancient evil and destroy all life in the galaxy.

The shady crew of the White Raven run freight and salvage at the fringes of our solar system. They discover the wreck of a centuries-old exploration vessel floating light years away from its intended destination and revive its sole occupant, who wakes with news of First Alien Contact. When the crew break it to her that humanity has alien allies already, she reveals that these are very different extra-terrestrials... and the gifts they bestowed on her could kill all humanity, or take it out to the most distant stars.

THIS BOOK CAME FROM MY LOCAL LIBRARY'S DISCOVERY SHELF. THANKS, Y'ALL!

My Review: I enjoyed it. Lesbian sex scene averted, blessedly, so I had no need to flee screaming. I never heard of a "demisexual" before, so my education continues (unexpectedly for someone so old).

One instance of the dreadful pollutant w-verb on p244. I damn near unswallowed on the page. But to be fair to the writer, both characters (sender and recipient) were in imminent danger of death when the heinous abuse of my eyestalks took place, so I don't doubt but what he was under some significant existential stress.

The characters, Captain Callie and Xenobiologist Elena anyway, are all as well made as one could wish. Lantern the Liar, of an alien race called "the Liars", was less three-dimensional but that's not really surprising or remediable for a character whose backstory is related late in the game via infodump. Lantern is positioned now to be a regular in future books, and she and her race and her religious order are fascinating to me, so patience is a must in reading this first volume.

The master aliens are creepy and xenocidal, and their tech is to die for (haw). The slave-alien Liars have been making hay off selling the said tech to humans for a good while. They've sold more than trinkets and trash to humanity, though it's all come on one Bill of Goods. The Liars have told their customers, who despite knowing the species' tendency to prevaricate whenever they feel like it, that the amazing permanent wormholes the Liars let them use to get to twenty-nine different star systems that humanity is allowed to colonize are the only ones and the big dumb schmucks bought it!

The truth is, needless to say, a lot more nuanced. And a lot scarier: The tech the Liars are selling turns out to have been developed by a race that's so evil that the Liars are terrified of them returning one day. After all, the Liars are their genetically engineered slaves.

Okay, yeah, it's all very Flash Gordon versus Ming the Merciless, but it's fun and it's got humor and heart, so I'm in for one more read before I decide its fate at my readerly hands. Far from the worst I've read, not the best either, and the author's willingness to take the slow road out to a higher vantage point is in his favor. Can't *quite* get to another half-star, but it's not because the story is bad but because it's been good for the past hundred years.
Posted by Richard at 10:40 AM