SIDE LIFE, a beautiful trip to the inside of reality 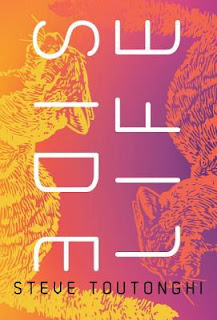 The Publisher Says: Vin, a down-on-his-luck young tech entrepreneur forced out of the software company he started, takes a job house-sitting an ultra-modern Seattle mansion whose owner has gone missing. There he discovers a secret basement lab with an array of computers and three large, smooth caskets. Inside one he finds a woman in a state of suspended animation. There is also a dog-eared notebook filled with circuit diagrams, beautiful and intricate drawings of body parts, and pages of code.

When Vin decides to climb into one of the caskets to see what happens, his reality begins to unravel, and he finds himself on a terrifying journey that asks fundamental questions about reality, free will, and the meaning of a human life.

THE PUBLISHER PROVIDED AN ARC FOR MY REVIEW. THANK YOU.

My Review: I want to tell you everything about the story because I can't imagine you'll pass up the book if I do. The problem is that the Spoiler Stasi will come drag me away, never to be seen or heard from again. So here:


“The machines of the mind are more difficult to recognize than machines of iron and steam.”

That's the basic building block of the entire imaginarium that Author Toutonghi creates. The story of Vin, a tech startup failure, is predicated on the principle that he will know what machinery is when he sees it. Of course, the story's existence means that there is no way he will.

What's a tech bro to do when he fails to make his wad of cash from creating a new, wild Thing That'll Change The World? Vin decides to house-sit for fabulously rich but vanished Nerdean. Her house is an amazeballs mansion on Queen Anne Hill, the beating heart of Seattle's too-rich too-young $10-coffee-drinking yuppies (as my generation sneeringly called them). Author Toutonghi, a lifelong Seattleite, made me feel the city was a character in short, deft strokes. No long paean to place, this, rather a grounded in particularity poem. I like the latter just as much as the former. My lip-curling snark at the expense of Vin's generational cohort comes with being old and poor, so YMMV as always.

Vin's obsessive nature, in fact the Asperger's he seems never to have had diagnosed, leads him to disassemble the interior of this beautiful piece of architecture. He's searching for the one-name owner, convinced she's invisibly there somewhere although not likely to be either safe or, in fact, necessarily even alive. Vin keeps going, ignoring his only friend and the remnants of his family, not heaving his less and less clean body into sunshine or showers, until he finds what he most wants: Escape.

What are these crèches in the sub-basement hideaway? There are three...why? Can Vin, who recklessly and quite necessarily climbs into one, rely on coming home from wherever it is he's about to go? Hell, who cares, what the guy's leaving behind just ain't that great so off we go! I'd do precisely the same thing. See that weird device that can't be explained in any framework I possess? Notice the craptastic life I've got? Tally-ho! Let's see what happens.

And here is where I got that half-star thump. Author Toutonghi wrote Join, which I gave a good solid review in 2016. I liked that book a great deal as well. I didn't like the major missed opportunity I saw in it, and complained a bit about in my review. That's my issue here: Major missed opportunity again. If someone comes onto the stage I want them to be somehow explained and/or justified. Not necessarily even all that thoroughly, although I'd like that better as a reader, just tied in to the subtle and complex framework of this inner-space novel. Several pieces of the puzzle of Vin's multiversal travels and lives weren't given enough shape to assume real meaning in the story. NOTABLY included here is the cruel tease of introducing the fascinating scientification of the art of cliodynamics, utterly dropped...which means not explicitly tied into the story.

Now, the story itself: It's not a rollicking sci-fi thriller, as the publisher's comparisons to Philip K. Dick and Blake Crouch imply. Instead it's a well-built and deeply affecting interior novel, an exploration of Vin in all his multivarious selves, and in that sense a very French sort of récit. We're always a step away from the action due to the nature of our trip down the rabbit hole with disintegrating Vin. He's lost everything, he's throwing the dregs away with both ungrateful hands, and now he's found an out. Well, well, Vin, how shocking that you'd choose to duck out, so not like a guy like you. *snort*

But that character trait (I damn near typed "flaw" but had a stern talk with myself) makes possible a thoroughly fascinating self-autopsy. Vin's travels through the multiverse are all about working through a dreadfully wasted life, assigning blame and meaning, and all without consequences...except death, insanity, and Armageddon. Y'know, little bagatelles like that.

In the end, we get to this exact moment in identity discovery, this basic building-block of reality:


"But think about this, maybe even though there are infinite versions of you, maybe every single one of them is an asshole."