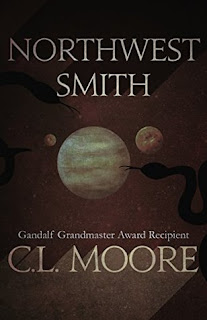 The Publisher Says: From C.L. Moore, the legendary pioneer of classic sci-fi, comes the collected adventures of the iconic space outlaw, Northwest Smith.

First published in Weird Tales in the early 1930s, C.L. Moore’s Northwest Smith stories, especially SHAMBLEAU, were hailed as some of the most imaginative and vivid science fiction stories ever to come out of the golden age of sci-fi. At a time when women were heavily underrepresented in the genre, C.L. Moore was among the first to gain critical and popular acclaim, drawing comparisons to contemporaries like H.P. Lovecraft and Fritz Leiber.

Northwest Smith, now recognized by many as the archetypal space smuggler and gunslinger, is an adventurer in the classic sense of the word, and these thirteen stories chronicle the bizarre dangers, interstellar wonders, and titillating romances that captured the imagination of a generation.

My Review: C.L. Moore was a phenom. She was a popular pulp goddess in an era that welcomed not the talented female, not even the grudging welcome of the feminist awakening time or the offhand occasional kudo of today's dismal cultural landscape. She muscled her way through the door of a paid writing career on talent, nary a "feminine wile" or a compromise in her integrity to be seen. It's true that she married...Henry Kuttner...and that she and her husband frequently collaborated, as they together earned more than she did alone on a per-word basis. But that seems a quibble as, in this our good day of the 21st century, women still earn almost 1/3 less than men in identical jobs. Why this should be is, was, and always will be a complete bafflement to me. No one has ever given me a remotely sensible answer to the question of why this should be true, now especially but really ever.

Anyway. Northwest Smith is, next to Jirel of Joiry, Moore's most famous character. Jirel gets more attention because she's a badass warrior queen in a fantasy setting, where NW is a man in spacer's leathers that Moore very lovingly describes more than once. And Moore also makes NW an object of desire, mostly for women but occasionally for men, and in one *very*memorable*story* even has ol' Northwest delivering a whole bunch of barely euphemised blowjobs to, well, to an unclearly described sentient and possibly even animate divine...thingy. No, not that thingy exactly, but a kind of numinous, umm, like cock-fountain-feeding trough thingy. Hell, I dunno, it's her kink not mine, but believe me when I tell you that the acts NW performs are most definitely and most lovingly described in such a way that any adult (even non-pervy ones, if you can find one to ask) knows *exactly* what she's talking about.

The coda in this book is what we today call flash fiction. A story called Song in a Minor Key that's about 500 words of homecoming nostalgia for Northwest as he at last returns to Earth after more than 20 years of exile in the alt-physics Solar System committing petty crimes and saving damsels in distress among the three inhabited planets of the inner worlds and one foray to the inhabited moons of Jupiter. It's a Golden Age Solar System for sure, everything has earth-standard atmospheres and earthly gravity or close to it; a naive world that she builds from her era's very different understanding of how the whole other-planets thing works. She even makes a nod towards the dawning realization among scientists of the unlikeliness of her premise in a story set on Earth's Moon. But I like the idea of reading about Otherness, and there's very little more Other than a Solar System with other human races on other worlds.

I don't think this collection will be for everyone. I suspect modern women will find much to sneer at in Moore's seductive enchantresses, mantraps to a woman. Stick to Jirel of Joiry, female persons. Men addicted to modern worldbuilding will buck and rear at the setting. But a few of us weirdos exist who want to revisit the dear dead days, and this is a means to do so; even though we can't undo modernity's death grip on our vitals, for some of us there is enough of the old-fashioned sexist racist unquestioningly accepting of that status quo left to resonate unironically with assumptions we no longer hold. All fifty of us should probably read this book.

Just not all in a gulp. It goes down easier in tapas-like savorings.

Shambleau hot damn! No wonder my memories of this collection are so...fond. Golden Age perversion of pleasure as Medusa's master pattern introduces Northwest Smith to delights so revolting that he can't stop himself from reveling in them while hating the perverse pleasures he's enjoying.

Black Thirst was daring stuff in the 1930s. It explicitly makes Northwest Smith into the object of a male-like alien creature's dark and hungry desire for male beauty. Shocking! And ever so humidly written.

Tree of Life is another "nameless horror infinite dread defeated by the steely honour of Northwest Smith refusing to be violated" story. Much of a muchness, in other words. Thag's little pocket universe is cool. The Botticelli grass is a great and lasting image.

Scarlet Dreams appeared in May 1934. They were more innocent times. This story, presented today, would only be published in one of those one-handed reading magazines. (Do those still exist or is wordy porn all on the web like visual is now?) Northwest gets completely hooked on tube steak, the literal only source of sustenance in a weird alternate dimension, and just loves it. A woman sacrifices her life to unhook him. *whew* This could easily be retitled "The B.J. Story." And now it has an illustration! Artist Gary P. DeSalvo painted a perfect atmospheric rendering of the story called Energy Source at Horror Sleaze Trash, which site one should put on the webtour of life.

Dust of Gods features Northwest and his Venusian partner in crime Yarol seeking the supercharged ashes of the Elder God Pharol (itals in the original, and always used in referring to this particular god) at the behest of a Peter Lorre-esque little smoothie, that he may...who knows, destroy the universe or summat, he seems like that kind of guy. Spoiler alert: They don't give the ashes to him.

Paradise Lost makes it clear that Moore's weird physics, allowing inhabited Venus and Mars, knows no limits save those of the Divine as Northwest in his atheism resists the Will of the Gods to astonishing effect.

Julhi has Smith spending a very long time in the Venusian Atlantis-cum-Brigadoon called Vonng. He is accompanied by a Venusian woman/seer and a totally wacked devilangel named Julhi who seduces him with what resembles closely the acid trips I remember from my misspent youth. Just as he's about to pay the bill for his ecstatic adventure, he escapes by committing a violent act. Comme d'habitude.

The Cold Grey God finds Northwest in a very unwilling near-death experience of battle with the titular god. While committing theft in service of an dead-ish pop idol, NW opens a gate for Mars's long-gone dread god to return after a million-year plus exile to resume its bloody rule. His steely mettle is tested from within as never before by expelling IT from his own body. Big fun.

Yvala places the Circe legend among the inhabited moons of Jupiter, a tropical paradise where Yarol and Northwest go on behalf of some slavers to procure women for the sex trade. Icky, right? But it's really evocative and atmospheric and I reveled in the ending, major ickiness aside.