MY FAIR CAPTAIN, a sci-Regency...Regency romance set in a science fictional world. 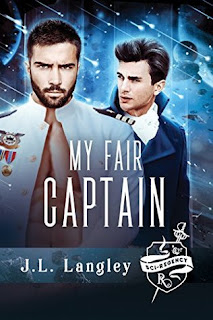 The Publisher Says: When Intergalactic Navy Captain Nathaniel Hawkins goes undercover to investigate the theft of an IN weapons stash, the mission raises painful memories from his past. Using a title he fled nearly two decades earlier, Nate once again becomes the Earl of Deverell, heir to the Duke of Hawthorne, in order to navigate the ins and outs of a Regency world. But planet Regelence—where young lords are supposed to remain pure until marriage—has a few surprises for Nate, not least of which is his attraction to Prince Aiden.

A talented artist, Prince Aiden Townsend isn’t interested in politics and the machinations of society gentlemen, and he adamantly rejects the idea of marriage and a consort. Aiden wants the freedom to pursue his art and determine his own future. But the arrival of the dashing and mysterious Deverell awakens feelings of passion and longing the young prince can’t deny.

As Nate uncovers a conspiracy reaching far beyond the stolen weapons, his future is irrevocably altered by the temptations of a life he never thought he could have. Drawn into the web of intrigue, Aiden is in danger of losing his life… and his heart.

THIS WAS A SHARED RE-READ WITH MY YOUNG GENTLEMAN CALLER. THANKS SWEETIEDARLING.

My Review: Not what I'd describe as a cohesive world-building job...and more fun than is strictly speaking allowed. Isn't all entertainment, written or spoken or performed, supposed to adhere to {rules selected by internet consumer of said medium}?

I mean, a Regency romance follows some quite strict rules and uses a deeply familiar, verifiable-by-research backdrop. This book, not so much. We're on a human-colonized planet in a galaxy-spanning civilization. The planets Regelence and Englor have a human population in a spacefaring culture, and each has elected to emulate Regency England as its social model. Seriously. That's what we're told. The story unfolds among the aristocracy, as Nate is a Captain of the Intergalactic Navy (who pays for this military force and to whom it owes its loyalty are not addressed here) as well as the heir to a Ducal title on his native Englor; he is sent to Regelence, home of the gay Royal Family whose second son Aiden is Nate's dream made flesh. And vice versa, though I'd be shocked if either of 'em was versa-tile. Hyuk.

Too bad he's Englorian and Regelence is being sabotaged by his planet's government, eh what? That's the non-bedroom action of the story. It's a pleasant if slight espionage story that leads to much suspicion between the planetary governments and the Intergalactic Navy. There are comparatively few moments of tension between Nate and the Regelence royals, oddly. There are also comparatively few major obstacles to resolving the spying case, though the second edition makes the story much more grounded in a reasonable if not believable milieu.

For example, my overarching and burning unaddressed question: Why would any living human consent to be anything but an aristocrat in this universe of Author Langley's? It is beyond me. How they got people to do any work at all when there are AIs and robots and flying cars (oof)...well...go with it, I told myself, for the sheer audacity of the thing, then decide if you want to come back for more. It's not for the SF fan, it's for the romance reader. Very special romance reader at that. The story's not-universally-popular tropes include:
--age gap: Nate's a parent-type dad in his latest possible 30s, Aiden's 19
--status gap: Naval Captain top on submissive aristocrat
--relatability-to-reader gap: gay parents of gay kids galore
The faint-heartedly hetero are strongly cautioned. The sex is, as a seasoned romance reader knows from this short list, very much a matter of roles and fantasies.

I myownself read this hawt sexy story with my disbelief on heavy suspension and it worked for me. The idea of planets settled by those whose psychosexual-sociological needs are in sync with my own is one I feel deep identification with. Ethan of Athos was the first of this type that I encountered, and its many pleasures left me wanting more. J.L. Langley was the second author I found (back in the Aughties) to use this deeply appealing trope.

For reasons surpassing my comprehension, man-on-man romance and sex are burgeoning in popularity among the ladies. I don't really understand it any more than I understand straight men getting all hot and bothered by lesbian sex, and honestly I just don't care anymore. All the stuff that goes on in others' fevered brains ain't none of my lookout, and I get to benefit from their imaginings in my own search for satisfying entertainment. (Except for the seven {7} instances of the dreaded, horrible w-bomb, "to w-i-n-k.")

In what is most likely the last quarter-century of my life, I hope to see the taboo against gay male romantic and sexual passion in mainstream entertainment media die. I'd love for Ryan Reynolds to get his way and have Deadpool get into a gay relationship in an upcoming film. Like the gay kiss on Glee years ago, it would be a before-and-after moment worth waiting for, and kudos to Reynolds being the kind of ally to put his career on the line.
Posted by Richard at 6:30 AM