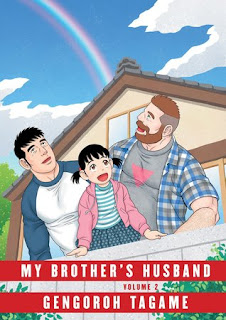 The Publisher Says: The concluding volume in the story of Yaichi, his daughter Kana, and how their meeting Mike Flanagan--Yaichi's brother-in-law--changes their lives and perceptions of acceptance of homosexuality in their contemporary Japanese culture.

As Mike continues his journey of discovery concerning Ryoji's past, Yaichi gradually comes to understand that being gay is just another way of being human. And that, in many ways, remains a radical concept in Japan even today. In the meantime, the bond between Mike and young Kana grows ever stronger, and yet he is going to have to return to Canada soon--a fact that fills them both with impending heartbreak. But not before more than a few revelations come to light.


SECOND VOLUME IN SERIES BEGUN IN MY BROTHER'S HUSBAND vol. 1

My Review: Yaichi's gay twin, Ryuji, married Canadian bear Mike after emigrating to escape his repressive, hidebound culture. He promised, swore!, he would have his twin—his only remaining family—know Mike as his husband. Then, as is the way with sworn promises, Ryuji died. Mike, to make his dearly beloved husband's promise come true, visits Yaichi and his daughter Kana in their home.

We pick up the story in medias res, this being a two-volume omnibus edition of the manga. Yaichi, a lovely man (for legal purposes), has his most acute attack of the collywobbles yet. Mike mentions that it's possible Kana will be a lesbian. These two pages made me laugh so hard I almost choked: 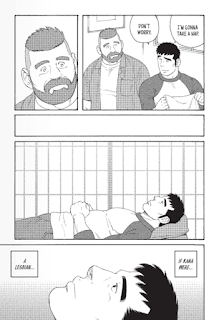 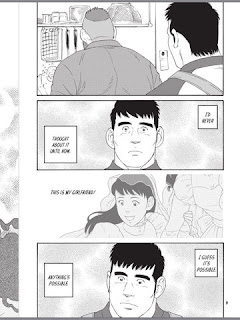 Poor Yaichi! What's a traditional Japanese father to think? My daughter with a woman?! HEEELLLP!!!!

The rest of the story is Yaichi coming to value and care for Mike, whose love for his brother is strong. They've lost so much, they've got to come to peace with each other. Mike has no problem with this, since he's been out a long time; Yaichi finds himself saddened that he didn't try harder to connect with Ryuji while he was alive because now he can't. All while being a divorced custodial dad to a little girl. Who has fallen utterly in love with her big Canadian bear-uncle.

A very telling scene comes when Mike goes to Kana's school, to be met with hostility and suspicion. It's really amusing at first because Mike doesn't see it, but it becomes a major Thing between Yaichi and his inner demons. It provides Yaichi with a chance to work through what he thinks about Mike's gayness and what Japan as a whole thinks about gayness. The men resolve their desire to be close to each other over a look at Mike's photo album, including wedding pictures. Yaichi realizes how much he will miss Mike as he's about to leave, and Kana asks for a sworn promise that Mike will visit again, or she gets to come to Canada to visit Mike.

And now I venture into personal territory. My Young Gentleman Caller, Rob, is 34 (thirty-four) years younger than I am. We might as well be Canadian and Japanese, since I understand his culture about as well as he does mine. The Moon landing was 50 years ago. I remember it vividly. I had to YouTube footage for Rob, who had sort-of heard about it. His FATHER was born two years after it happened. So we both relate to the "...say what now?" moments between Yaichi and Mike.

We talked at some length about the way it feels to be so different from someone you care very much about, and how that puts strains on one's inner sense of peace and quiet. We both worry about the other's feelings being hurt when we're being our separate selves...we both worry about the way our beloved handles the need we have to be understood. Am I trying hard enough, too hard, do I even know what he means? And it was this manga that called that conversation into being.

If you don't read the series for any other reason, read it for that one. It is good enough to start a life-altering conversation between people too different to know where or how to begin to do that for themselves.

Also! Extra! May the US be blessed with the live-action TV series! Here's a promo photo of the amazing casting: 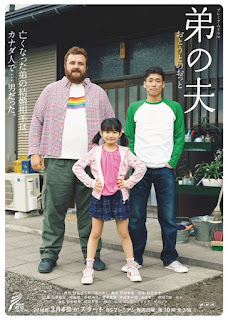