COMING THROUGH: THREE NOVELLAS, late-career excellence from a CanLit monadnock 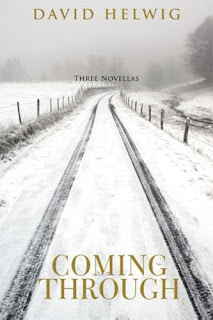 The Publisher Says: Writer David Helwig's place in Canadian Letters spans practically every realm, from novels, short fiction, poetry, and plays, to essays and reportage. Helwig is one of the generation of writers including Alice Munro, Margaret Atwood, and Michael Ondaatje to achieve wide critical acclaim and popular following in Canada. Even so, Helwig remains virtually unknown in the United States. Bunim & Bannigan is pleased to present for the first time Coming Through, a unique collection of three tightly crafted novellas of remarkable variety and versatility. These wise, whimsical, and mordantly funny stories by an under-appreciated master writing in his favorite genre are sure to delight American readers.

My Review: When I discovered Author Helwig had left us behind, it was at the same time the moment I discovered he had been among us for 80 years. I peruse Wikipedia's obituaries daily, always keeping a weather eye out for departed literary lights. I am a CanLit fancier from the get-go, and was thus enticed to click further when I saw that Helwig was an eminent Canadian. His stub entry informed me that he had worked for the CBC's television drama department, that he had seventeen volumes of poetry (!), twenty-five works of fiction, two collections of essays, a memoir, and a work of narrative non-fiction to his credit, and in a career that spanned forty-five years, that he had even translated Chekhov!

Yet I had never even seen him referred to on a US or Canadian "greatest" list, run across one of his books at the Strand, or so much as heard his name.

I live in a wonderful place where my local library is happy to bring me books from all over Long Island. Luckily for me the Nassau County libraries serve 1.4 million people so they have a pretty extensive shared collection. What one of the county's various libraries doesn't have is frequently available in the larger county next door, Suffolk, with its 1.5 million people. I sallied forth to the Long Beach Library's ALIScat site and, after discovering there were several Helwig titles available, eenie-meenied this one. I was favorably impressed with this late-career effort.

I am not surprised Helwig is unknown in the US after reading it, however. These are excellent pieces, well made, but of the literary world's least popular (read: slowest selling) area: The Quiet Room. There are no pyrotechnics here. Helwig committed the sin of being born male, so he had no natural constituency lobbying for him to receive his rightful share of attention as did fellow short-fiction mavens Alice Munro or Mavis Gallant. I knowingly commit literary heresy when I say this: He's every bit as talented and accomplished a storyteller as either of them.


Perhaps I have never grown beyond my young days, when every attractive young girl was a promise of the paradise garden, when I expected so much, gladdened by an eyebrow, a nose, a hank of hair, a breast, falling in love twice a day, never satisfied.

A great splash of roses...with that self-satisfied air that florist's roses always have, cosmetic abundance, the cryogenic look of a movie star after a successful facelift.

These from The Man Who Finished Edwin Drood
This short work is a uniformly excellent telling of the wages of sin. We are all monads, singular and indivisible units of universal life, for when we are divided, we are destroyed. "Wicked Uncle" (and how quickly that self-description palled!) learns, re-learns, ultimately owns his wholeness as his wronged predecessor, his wife's "starter husband" so to speak, dies in his home while in the guest room next to him.

Proceeding to some more man-centered prose, I offer:


Now the necktie is growing more unusual...to see three striped ones in this audience is odd almost to the point of that one might consider it ominous. ... Three strips of stripes from the drunken brush of God.

I expect that the striped ties will return for the end of the last lecture, as they were here for the beginning of the first. Their pattern of presence and departure is unreadable, but all truth is unreadable until it is the heap of dead facts we call history.

These are from The Music of No Mind
A story that's so deeply sad...a has-been (really a never-was) old lecturer in art history delivers three hours of talk over three nights. He speaks about all his hobby-horses, including the rotter whose death got him the gig, who once upon a time stole his wife. Richly allusive, gorgeously pictorial, utterly incomprehensible to one unlearned in the culture of the midcentury & its roots in the Belle Epoque. It badly needs illustrations! The artworks referenced in it won't be familiar to any but those unusually informed about the visual arts.

Finally, I offer these gems:


Moods, the weather of heart and soul.

A vain, foolish man, but weren't they all? Open their zippers and their brains fall out.

Chosen from A Prayer for the Absent
It is the longest, and to my mind least successful, of the novellas. I wasn't a big fan of Carman Deshane or of Norma; they carry the story, so that's a problem. These two people are well-matched adversaries. Carman's heart is weak; Norma's body got away from her somehow. In the end, they find some end-of-life peace in their sparring. Kind of a modern All in the Family Archie and Edith. I found those two tiresome forty-plus years ago, and their constant bickering was one of the biggest things that shoved me away from regular TV watching for twenty-five years.

All in all, the many pleasures I found in all three novellas outweighed the slight but real annoyances of unwanted nostalgia in the last one. I'd recommend these tales to a reader with a wide range of interests, a person whose acquaintance with Culture of the capital-C variety is solid. Or, just to be sure I spread the tent wide, someone unafraid of using Google to maximize the impact of a leisurely read.
Posted by Richard at 10:13 AM