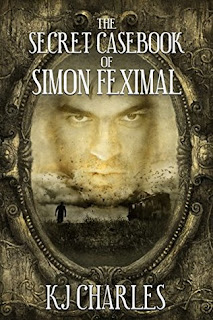 Rating: a warm and fuzzy four stars of five

The Publisher Says: A story too secret, too terrifying—and too shockingly intimate—for Victorian eyes.

A note to the Editor

I have been Simon Feximal’s companion, assistant and chronicler for twenty years now, and during that time my Casebooks of Feximal the Ghost-Hunter have spread the reputation of this most accomplished of ghost-hunters far and wide.

You have asked me often for the tale of our first meeting, and how my association with Feximal came about. I have always declined, because it is a story too private to be truthfully recounted, and a memory too precious to be falsified. But none knows better than I that stories must be told.

So here is it, Henry, a full and accurate account of how I met Simon Feximal, which I shall leave with my solicitor to pass to you after my death.

I dare say it may not be quite what you expect.

My Review: This isn't a novel, but a collection of connected short stories. I'm not upset by that, just noting it so others won't go in expecting something they won't get.

Most romantic fiction comes, these days, in series form. This book's series origins are in the short fiction world. Although the premise isn't unique, the untold story behind an unseen told story, it's got legs for a reason: It gives the read an intimacy, a sense that there is nothing held back, while at the same time holding back the more public face that never existed. I like that. It feels playful to me. It resembles Mark Dunn's hilarious (to me, at least) Ibid, the footnotes to a lost novel that was published in place of the novel so the publisher's loss wouldn't be total. That made me chuckle as well, for the same reason: It's playful! Too much Modren Litrachure is about as much fun to read as a root canal is to have.

Anyway, this book. I liked it for another reason: The protagonists age. They aren't 25 and 33 for the whole book. At the end of the book they're 48 and 56, explicitly stated, and have been together for 23 years. The math adds up! I damned near passed out. Too often the author doesn't do continuity like this in the world of romantic fiction.

In addition to my squeeing about the continuity thing, I need to mention the character development. As time goes by, any of us who have had any sort of long-term relationships know that the romantic urgency flies out the window at some point. You can't sustain that level of emotional excitement forever, and what takes its place in successful relationships varies. In the case of this couple, it's a shared calling/career. But as veterans of the relationship wars know, there's another powerful force that's inevitably part of the mix: Anger. People who are close, who live in close contact, inevitably rub each other the wrong way at times. In the case of Simon and Robert, the catalyst for the true, lasting anger that invades their relationship is family-based. How exactly true and accurate.

The resolution of that particular issue is just perfect. I was half in love with Author Charles before it took place, and completely infatuated after that story was finished. Oh that more romantic fictioneers would do this, would use the real stuff of living relationships to inform our fantasy of life with The One. It doesn't detract from Robert's love of Simon, or Simon's for his anchor Robert, for the story to include Robert going against Simon's well-founded and powerful desire for Robert NOT to save Simon's life.

Find bigger stakes than that. And then find another author willing to use those stakes to change the relationship the protagonists have in a new and realistic direction while still making the magical fantasy underpinnings of the story a part of that direction.

A very satisfying read. I don't give it more stars because, in the interest of fairness, I rate it based on its novelistic success and not its interconnected story success. Had it been presented to me as a set of stories, a la Tom Rachman's The Imperfectionists, I'd give it more stars. As it is, I give it my recommendation to relationship fiction fans in search of realism within their fantasy life, fantasy of life, and life of fantasy.
Posted by Richard at 12:37 PM