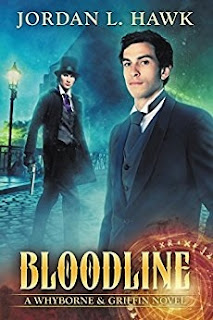 The Publisher Says: Between his bullying father and dissolute brother, Percival Endicott Whyborne has quite enough problematic family members to deal with. So when his sister returns to Widdershins asking for help solving the mystery of a derelict ship, Whyborne is reluctant to get involved. Until, that is, a brutal murderer strikes, leaving Whyborne and his lover Griffin no choice but to take the case.

The investigation leads them deep into a conspiracy of blackmail, murder, and darkest sorcery. But worst of all are the secrets held within the family itself, one of which will destroy everything Whyborne believed to be true, not only about his family, but about himself.

My Review: Guinevere, Lady Gravenwold, is Whyborne's elder sister. She was never on his side as a child locked in battle with Stanford, his lout of a louse of a lush of an older brother. As such she didn't and doesn't loom large in his life, being a married and titled English matron. She is, nevertheless, the vector for an abrupt and painful change in Whyborne's life and in his loving relationship with Griffin. She brings the Endicott twins, Theo and Fiona, English scions of the matrilineal ancestry shared by Whyborne's siblings. They're everyhting a country bumpkin American cousin expects English aristocrats to be: Sophisticated, glamorous, amorous (at least Theo is, noticing Whyborne "like a dessert he wants to sample" according to Griffin's sour, unimpressed take on things), and very, very eager to make their American relatives among their social conquests.

Social, and other, kinds of conquests. Many other kinds.

This entry in the series is a very different beast from the others. Yes, Whyborne still lies-by-omission to a worried Griffin about his "dabblings" into sorcery. Yes, Griffin still tries his best to stop Whyborne from taking ridiculous risks with life and limb, since he as a former Pinkerton understands how quickly a controlled situation can unravel into monstrous chaos. He's got the mental scars to prove it. But what makes this entry's stakes higher is the extremely close position of each of the story's lines to Whyborne's most beloved and cherished people.

A new people, the ketoi, play their most significant role to date. The beauty of their existence is heart-hurting by the end of the book.

Author Hawk has made these books cumulative in their emotional effect. Read them in order. And I strongly recommend you read them.