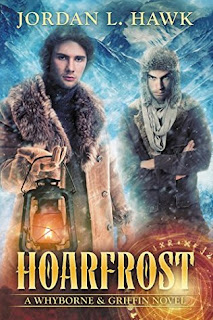 The Publisher Says: Sorcerer Percival Endicott Whyborne and his husband Griffin Flaherty have enjoyed an unprecedented stretch of peace and quiet. Unfortunately, the calm is shattered by the arrival of a package from Griffin’s brother Jack, who has uncovered a strange artifact while digging for gold in Alaska. The discovery of a previously unknown civilization could revive the career of their friend Dr. Christine Putnam—or it might kill them all, if the hints of dark sorcery surrounding the find are true.

With Christine and her fiancé Iskander, Whyborne and Griffin must journey to the farthest reaches of the arctic to stop an ancient evil from claiming the life of Griffin’s brother. But in the rough mining camp of Hoarfrost, secrets fly as thickly as the snow, and Whyborne isn’t the only sorcerer drawn by the rumors of magic. Amidst a wilderness of ice and stone, Griffin must either face his greatest fear—or lose everyone he loves.

My Review: And here is where everything changes.

The first words of this book, Griffin's words which marks the first big change, are:

POW just like that you, the series' reader on through this sixth entry, are busted in the chops. The long history of Griffin and his adoptive father is now over. The possibility of a reconciliation is gone forever. Now Griffin has to find a way to forgive. Forgiveness is vital to an injured, abused child. It doesn't always mean restored relationships. But Griffin is now past the point where that can happen.

First words of the first page. THAT is bravery, Author Hawk.

Will it surprise you to learn that Griffin's revelation is but the first painful wrench in this journey? I thought not. Griffin's father's memorial service, as he was asked by his adoptive mother not to attend the funeral, brings comfort to Griffin from the depths of the sea that Widdershins abuts, and allows him to hope in his desolated heart that the letters his father returned to sender unopened will finally reach the hard, unforgiving heart of the old man via their smoke.

The events of the book begin on a beach in Widdershins and end on a dockside in Alaska, and there is not one moment of downtime anywhere along the way. We're treated to mushing across the frozen tundra, spelunking for relics of an ancient civilization, sibling and familial rivalries that can never fully be resolved, and meetings with old enemies that change the course of countless lives. Whyborne and Griffin are, through it all, steadfastly each others' rock and refuge. Their misunderstandings are all based in the intense desire of the lover to protect the beloved at all costs. Their ultimate challenge is always "how can I be sure my own true love is safe? how can I make him safe first, then whole, then happy?"

The answers are, for the first time, given in chapters told from alternating points of view. It's about time that Author Hawk gave Griffin some real, extended attention. I welcome this new format. Also welcome is Griffin's newfound brother Jack. He's got possibilities, and I hope we'll see him again. The memory he shared of giving his coat to Griffin as he was taken in by a different family, one that wasn't like Griffin's, was deeply moving.

If my previous warblings of pleasure haven't convinced you to give the series a try, this one won't either. But you are missing a treat.
Posted by Richard at 10:00 PM