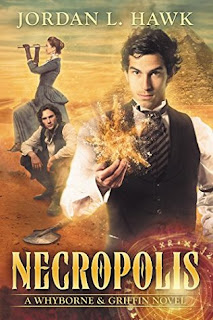 The Publisher Says: Introverted scholar Percival Endicott Whyborne has spent the last few months watching his lover, Griffin Flaherty, come to terms with the rejection of his adoptive family. So when an urgent telegram from Christine summons them to Egypt, Whyborne is reluctant to risk the fragile peace they’ve established. Until, that is, a man who seems as much animal as human tries to murder Whyborne in the museum.

Amidst the ancient ruins of the pharaohs, they must join Christine and face betrayal, murder, and a legendary sorceress risen from the dead. In the forge of the desert heat, the trio will either face their fears and stand together—or shatter the bonds between them forever.

My Review: Book four in a series is a tricky point. There's a reason most of the fantasy/genre publishing world has been dominated by trilogies: We're mostly sick of the joke by the time we get to book three. Even of characters that are delightful and daisy-fresh and involved in unique endeavors, by the time we've read 300,000 words-plus about them, we're in full fatigue mode. It's the same reason there are danger points in marriages, cliffs that TV shows fall over, serial entrepreneurs.

So in a series of books that's about a pair of lovers becoming a couple, learning about themselves, each other, their families, and oh yeah by the way those monsters under your bed? totally real, how do we do the Bore-Me-Not Rhumba? At about the pace the men involved do it, per Author Hawk. Whyborne's antics in the first three books have led his gawky, scholarly self down some most unusual paths, and Griffin is deeply concerned for the safety and sanity of his mate. Their adventure in this book leads them to follow Christine, the token real girl, to the deserts of Egypt in order to thwart Nyarlathotep coming to Earth. (That's one of Lovecraft's Elder Gods, in case you're wondering.)

But the trip to Egypt is Whyborne's worst nightmare! Griffin, well, traveling is nothing to his former-Pinkerton self. He's quite looking forward to it...except he's worried about his beloved Whyborne, whose studies in sorcerous spells make him much more than a little nervous:


If the man couldn’t make an argument one way, he’d find another.

Welcome to marriage, Whyborne. Griffin is completely invested in you, your health, your survival. His happiness depends on your maintenance of all those things. He's going to argue with you about your behaviors when he sees you acting counter to what he knows is your best interest. That it isn't what you think is your best interest is what keeps marriages alive.

As is also bog-standard normal for long-term love, Party of the first part might as well be looking at a fun-house mirror for all the resemblance their self-image bears to Party of the second part's vision of them:


Griffin had once called me brave, but I couldn’t imagine how he would possibly think it. I feared everything: talking to strangers, leaving Widdershins, humiliating myself in public…the list went on and on. There was nothing for a man such as Griffin, who as a Pinkerton foiled bank robberies and chased down hardened criminals, to admire in me. But he thought otherwise, mad as it sounded, and his belief made me want to be that man, the one he could admire.

The bright face of being in love. How common a feeling, to want the beloved to be pleased with us! And how seldom we see that the beloved is looking squarely at us and seeing the strength that it takes to move in the face of fear. Griffin sees Whyborne's best in seeing his behaviors and knowing the fears and failings behind them:


How you burn, bright enough it almost blinds me. But I can’t look away.

And how often the beloved already is, far more than we ever credit or even believe when we're told as Griffin directly says to Whyborne above, possessed of our secrets and infatuated by our strength in the face of them.

It's a pallid but similar investment that the series reader makes in the series. This danger point, book four, sinks many a series under the weight of its tics and crotchets. Whyborne, our PoV character, is monumentally self-absorbed. The woman-ness of a lady isn't really an excuse for Whyborne's inability to see her, a new character in this book's, interest in him:


Her smile offered me no clues. “Very good indeed,” she affirmed, before turning back to the wall and leaving me to my confusion. ... I opened my mouth to ask what she meant. At the same moment, she leaned forward and kissed me.

And thus is a silly git shocked, shocked I say, by the mere existence of women aware of his desirability! It's played for comedy, and truthfully I've been Whyborne more than once in my life (it shames me to admit), but it's part and parcel of Whyborne's least appealing trait. It's very much at the fore here. It's a crotchet that could sink the series easily, as I found my eyes rolling without conscious volition...except Author Hawk got there ahead of me.

One of Griffin's refrains has been his concern for the effects of Whyborne's researches on his safety. Whyborne's counter is always, "look at how many times it's saved our bacon!" And this point is inarguable, but to one side, of Griffin's concern. Deflecting attention is a survival thing for Whyborne, growing up in a terribly dysfunctional family. It's been working fine until now, but Griffin and Christine are in much more danger than ever from multiple sources. All the sources are magical. All of them demand that Whyborne override Griffin's loving concern for his safety. All of the threats also demand that he de-absorb himself in his own head and notice, really and truly notice *in*the*moment* that his friends are real even when he's not paying attention to them.

About this time, most authors of series fail. They don't let the character that needs to grow make the leap. Author Hawk does, I'm very happy to say, and does so very explicitly. It is the reason I will read books five and up. I've included the quote as a spoiler, so look no farther down unless you're game for a spoiler.

REALLY AND TRULY THERE'S A SPOILER DOWN THERE

LAST CHANCE TO LOOK AWAY

Whyborne, afraid for his loved ones' continued safety after the supernatural enemies they faced down in this book, makes the following vow:


But I wasn’t helpless. And given the dark turns our lives had taken, the horrors we’d faced, it was my responsibility to arm myself as well as I might against any future threats. If we survived tonight, I’d stop pretending to be a dilettante and throw myself fully into the study of the arcane arts. I’d become a true sorcerer.

And now let the shenanigans commence. *gleeful hand-rubbing*
Posted by Richard at 6:30 AM