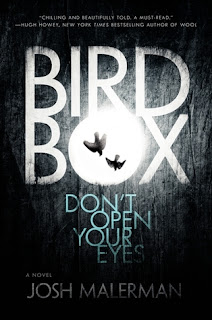 The Publisher Says: Something is out there, something terrifying that must not be seen. One glimpse of it, and a person is driven to deadly violence. No one knows what it is or where it came from.

Five years after it began, a handful of scattered survivors remains, including Malorie and her two young children. Living in an abandoned house near the river, she has dreamed of fleeing to a place where they might be safe. Now that the boy and girl are four, it's time to go, but the journey ahead will be terrifying: twenty miles downriver in a rowboat--blindfolded--with nothing to rely on but her wits and the children’s trained ears. One wrong choice and they will die. Something is following them all the while, but is it man, animal, or monster?

Interweaving past and present, Bird Box is a snapshot of a world unraveled that will have you racing to the final page.

My Review: So I was packing this up to send to a longtime friend when I ran across a review of another Malerman, Unbury Carol, and got to thinking about whether I'd reviewed this book or not. Checking it out, turns out I never did! Well, I got it from Ecco in 2014, and that was the year I went crazy, so I guess I have an excuse.

Now that we're into 2018, we're in for a film of the book! Eric Heisserer wrote, Sandra Bullock stars, Netflix distributes the five-years-coming feature, which sold to Hollyweird before the book came out. Say what you will about Heisserer's Arrival as an adaptation of Ted Chiang's "Story of Your Life", it was a well-written movie qua movie.

I was amazed at how proficient Malerman's prose was when I read the book. It's the artifact of a lot of rewrites and it's been guided by skilled hands. He did his mom proud. (He dedicated the book to her.) I was so happy with the way Malerman unfolded the story. He was careful to make that the sensation of reading the story...unfolding, like an origami crane being reverse engineered or a time-lapse film of a sunflower blossoming.

Malorie is one hard-luck chickie. She no sooner gets free of her hick-town upbringing than she gets caught. She no sooner tells her mama she's gonna be a grandmother than the whole world goes batshit crazy and starts killing themselves and each other. She no sooner gets to a safe haven than someone sabotages it...but this time she's got some luck! She manages to keep herself and her baby, oh and another woman's baby because why have trouble when you could have double trouble?, alive! Yay?

The way Malorie survives is astoundingly grim. I don't honestly know why she kept going. To do what, accomplish what? Blindfolds are the only protection from seeing whatever it is that makes normal people do violent and abnormal things. She and the two kids are almost always blindfolded it seems. But is this a way to live? Malorie asks herself this all the time, but appears to reach no answer and by default keeps herself and Boy and Girl alive. (That's what she calls them, not me being cute. After all who needs names in a group of three?)

So there it is...post-apocalyptic set-up par excellence. I was drawn in to Malorie's living arrangements and compromises and was rocked along by the pace of the story. I am really impressed by Ecco's production of the actual physical book. The cover is a lovely photo of the titular birds; the jacket has a cut-out to the bird image; the title page has a wonderfully creepy tree motif that the chapter titles echo. It's all of a well-thought-out piece. It gives the novel a very evocative and appropriate book to home itself in.

What a treat it was to read it. I can see that it's got terrific film potential. I'm not at all surprised that it's ended up at Netflix, it's a perfect fit for their catalogue. I hope you'll read the book, and expect that if you do, you'll want to see the film.
Posted by Richard at 6:30 AM