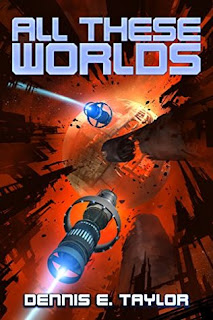 The Publisher Says: Being a sentient spaceship really should be more fun. But after spreading out through space for almost a century, Bob and his clones just can't stay out of trouble.

They've created enough colonies so humanity shouldn't go extinct. But political squabbles have a bad habit of dying hard, and the Brazilian probes are still trying to take out the competition. And the Bobs have picked a fight with an older, more powerful species with a large appetite and a short temper.

Still stinging from getting their collective butts kicked in their first encounter with the Others, the Bobs now face the prospect of a decisive final battle to defend Earth and its colonies. But the Bobs are less disciplined than a herd of cats, and some of the younger copies are more concerned with their own local problems than defeating the Others.

Yet salvation may come from an unlikely source. A couple of eighth-generation Bobs have found something out in deep space. All it will take to save the Earth and perhaps all of humanity is for them to get it to Sol — unless the Others arrive first.

My Review: When the limitations of a single human lifespan are removed from a sentient being's development, what will happen? Will the being go mad, become frozen emotionally, decide to destroy the Universe and see what happens next?

I am jealous of Bob, I am happy Author Taylor decided to write Bob down, and I am all done with the series of novels explaining the Bobiverse. Kinda sorta wish I wasn't but I am, and I think a lot of y'all should pack a Kindle with these three novels and light out for the Bobiverse right quick. The reason is that, in reading the books in order, you'll come to realize that Author Taylor doesn't have a high opinion of the species and still makes a concerted effort to save us. He doesn't consign us to the scrapheap of history with a shrug and a ~meh~.

In this moment of US national history, it's probably more than I'd be able or even willing to do, so it made my days a bit brighter. I'm happy to be jollied along by the greater generosity of a Man with a Plan. And so, I suspect, might other guys be. And I stress the "guys" part—this is a Guy Book in every particular. There are very few female characters and only one, Bridget, is at all developed. Even she is a guy in a woman suit.

Bridget does provide something unique to the Bobiverse...she has a family, kids who grow into beings both like and unlike her. Her relationship with those kids as all the parties age...Bob, in his own way, ages as well...makes for some excellent drama and some astonishing emotional resonances with readers over 50.

I'm also at the point in life where another factor of the Bobiverse, the meditation on personal immortality and the options it provides, is particularly interesting to me. I don't think I'm quite as eager for it at my age as I would have been at Bob's age (31) when he dies. I'm not saying it doesn't have a huge upside. I'm saying that I now feel as well as see the downside, the inevitable losses and griefs piling up under the carpet until the Karastan is basically a blip on the Everest of stuff not dealt with. Author Taylor goes there, as well, and I suspect it's a subject of newfound interest to the intended audience for the book.

The idea of family comes in for some particularly inventive workouts in the Bobiverse. One of the intriguing things about immortality, particularly in Bob's form of multiple "clones" of his conscious mind branching from the moments of separation, is the expanded family sense it offers. Each new generation of Bob-clones is one more removed from Original Biological Bob, then Replicant Bob, then the cloned Bob-minds that cloned Bob-minds that now clone Bob-minds...yet all have perfect digital recall of the "ancestral" Bobs to the moment of their awareness as individuals begins.

Mind-blowing, isn't it? Think on it: generations of sibling-selves with your character! Every facet would be fully explored, of course, like all siblings each unique individual would seek to become different, to distinguish itself from all the others around it. In effect, though the clones would start with certain memories as a base of contact with all the other sibling consciousnesses, as the generations of cloning take place the point of commonality would be deeper and deeper under the sense of personal uniqueness.

It would be fascinating to see this play out! I wanna be in the Bobiverse, dammit!

Except, of course, for the Bobiversal solution to the Fermi Paradox ("where is everybody?"), the Others. A better monster-movie villain I ain't never read. Scary. Don't deny yourself the simultaneous pleasure and fear of experiencing the Bobiverse! Like, now!
Posted by Richard at 6:30 AM