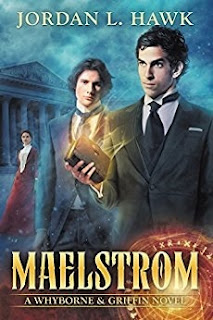 The Publisher Says: Between his father’s sudden—and rather suspicious—generosity, and his own rash promise to help Christine plan her wedding, Percival Endicott Whyborne has quite enough to worry about. But when the donation of a mysterious codex to the Ladysmith Museum draws the attention of a murderous cult, Whyborne finds himself in a race against time to unlock its secrets.

Meanwhile, Griffin has a case of his own: the disappearance of an historic map, which quickly escalates to murder. Someone is sacrificing men in dark rituals—and all the clues lead back to the museum.

With their friends Christine and Iskander, Whyborne and Griffin must discover the cult’s true goal before it’s too late. For dark forces are afoot at the very heart of the museum, and they want more than Whyborne’s codex.

They want his life.

My Review: Here's an amazing fact for y'all. I hate the c-a-t in this series because, well, it's a c-a-t. In point of fact the presence of a c-a-t in a book as a suitable companion for a male human is grounds for a one-star deduction from the five total a book can earn. And yet the sharp-eyed habitué of these precincts will note that this book has a five-star rating! Has His Growling Curmudgeonliness softened in his disdain and disgust for Felis catus?!

Don't register for those classes in the aerodynamics of pork just yet, pigs ain't a-flyin'.

While the c-a-t is prominent in this book and is even presented as capable of performing actions not directly beneficial to itself (which is how we know we're reading a novel), the main focus of this book is on a subject near and dear to my heart: Hating your siblings and your parents, while acknowledging their ability to throttle back their intrinsic evil enough to perform actions that, when squinted at from a far enough distance and lit exactly perfectly, can be construed by an unbiased observer as not entirely destructive. Whyborne's selfish and self-centered father has lost his wife, his adored elder son, and both his daughters; it's no surprise that the poor chump realizes he'd best mend fences with his remaining son, faggot or no. Also no surprise is the said son's unwillingness to let go of his grudge against the old bastard.

And here's where that star comes from. This plot arc has developed over the course of the entire series. It's a difficult task to keep a reader involved in an arc over more than one book without making frequently eyerollingly hamfisted attempts to wedge the damn thing into stories better off without it. Author Hawk has magical fingers. This series doesn't suffer from the dreaded hamfistedness. The presence of Whyborne's father is always plausible or he's left out. While he's there, he acts in character. Even when it's obvious to the reader he's doing his level best to make it up to Whyborne, the man is his abrasive and selfish self. No miracles are adduced. Just as we see the attempts as well as the selfishness, Whyborne does not.

Griffin, however, does, and he tries to offer his dearly beloved a perspective not wholly hostile to Whyborne père. The offer is rebuffed with brusqueness, even a scoche of hurt feelings. Whyborne begins to fear that his beloved husband has been bought off by the sudden generosity his father has shown Griffin. It's even enabled Griffin to purchase a motor car! A (period appropriate) Curved Dash Oldsmobile: 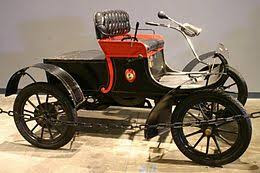 Is that not the most amazing thing! It is in Widdershins, Massachusetts, I can promise you. Griffin is almost bursting with eagerness to take Whyborne for a ride!

In the car, you dirty-minded dregs. In the car.

So Whyborne's fears for Griffin's loyalty are not unfounded; plus he now has to ride in a motor car or risk hurting his dearly beloved's feelings. So into the damned thing he climbs (greater love hath no fuddy-duddy), thence to be sped at a blistering pace (almost twenty miles an hour!) hither, thither, and yon. Worse yet, Christine and her intended groom Iskander the half-Egyptian are enraptured by the damn thing as well. Has Whyborne père cast his net so wide as to deprive his son of all support and succor? The rotter! Then, if that isn't enough to frame Whyborne père in the most villainous light imaginable, he has the audacity to all-but-demand his son visit the evildoer of his childhood, formerly fair-haired boy Stanford, in the comfy sanitorium where he's confined in lieu of a prison cell (greatly to Whyborne's disgruntlement) for the crime of murdering various and sundry people including their mutual sister.

In acceding to his father's barely-not-a-demand to visit Stanford, Whyborne acts like a mulish, unforgiving, spiteful brat towards Stanford as the latter brandishes sweet words and requests for reconciliation. How petty, how small-souled of him, no? Even Griffin advocates for peace! Griffin!! The man was nearly sacrificed to the Elder Gods by Whyborne père and then nearly blown away by Stanford's (badly aimed, thank goodness) gun! Whyborne's feelings of isolation make sense.

I am fully aware of his faulty reasoning and his sense of injustice being perpetrated on him and his pettish whining all from the inside. I see it in myself when dealing with my own "family." (I hasten to add that my siblings have never aimed firearms at anyone nor are they, to the best of my knowledge, sharktoothed half-fish.) So Author Hawk was already singin' my song. The way the family drama and the story drama each resolve in step with the other felt natural, inevitable to me. The fact that Whyborne's loving husband and his best friend both support him emotionally as well as nudge him towards a more charitable view of his intimate enemies is a great enrichment of the emotional facet of the series. It's one reason I keep reading the books. By now most series stories are thin, floppy things. Not Whyborne & Griffin. The world the men occupy is different from our own but keeps adding layers and nuances and even, just like life, harks back to remembered events both fun and not so much.

As this installment of the loving, exciting lives of Whyborne & Griffin approaches its end, there is a chapter...57 to be precise...that will profoundly expand your appreciation for Author Hawk's chops, and will most likely move you as well. For that alone I will read the other two books already out in the series. But I do so in the hope that there will be others to come. It's rare that I feel a desire to continue a series to this length. I feel a strong need to finish what's out before I being the tedious process of waiting for more.

Trigger warning to the squeamishly heterosexual. Depictions of loving and consensual but still filthy-pig-dirty sex exist in here, just like they do in life; avoid if that's disagreeable to you. Also start at the beginning or you'll be utterly at sea reading the later books.
Posted by Richard at 6:30 AM