FOR WE ARE MANY, second Bobiverse book in a totally geekfest series 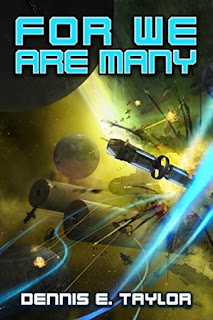 The Publisher Says: Bob Johansson didn't believe in an afterlife, so waking up after being killed in a car accident was a shock. To add to the surprise, he is now a sentient computer and the controlling intelligence for a Von Neumann probe.

Bob and his copies have been spreading out from Earth for 40 years now, looking for habitable planets. But that's the only part of the plan that's still in one piece. A system-wide war has killed off 99.9% of the human race; nuclear winter is slowly making the Earth uninhabitable; a radical group wants to finish the job on the remnants of humanity; the Brazilian space probes are still out there, still trying to blow up the competition; And the Bobs have discovered a spacefaring species that sees all other life as food.

Bob left Earth anticipating a life of exploration and blissful solitude. Instead he's become a sky god to a primitive native species, the only hope for getting humanity to a new home, and possibly the only thing that can prevent every living thing in the local sphere from ending up as dinner.

My Review: This entry in the three-book series is less of a romp than the first because, of course, because the territory is no longer new or fresh; but it's still a hoot and a holler. I had such a great time going back to the Bobiverse! These books are a pleasure to me because their humor resonates with me:


At times like this, I wondered if I hadn’t gone a little overboard with the level of detail in my virtual-reality environment. There was no reason for me to even have nether regions, let alone for them to pucker.

And that should tell you what you need to know about the suitability of the series to your reading needs. If that neither makes you laugh nor gives you a sense of the subject of the books, best you pass them by.

This installment brings us past the previously known Bobiverse...the bubble of space that Bob's previously created new selves have gone off to explore...and into contact with more new species. There are new threats, new ways of getting the heck rid of old threats, and plenty of the old threats come around again:


I sincerely hoped that in the fullness of time, they’d have the opportunity to get all bent out of shape about environmentalism.

Seems that "intelligence" is a menace...and maybe VEHEMENT had a point. (Bobiversals will get that.) But there's nothing like a replicant on a mission to make the Universe safe for sentient life. The Bobs come through this book without a hint of middle-book-itis. The action doesn't slack. The stakes don't falter. The pace of the book doesn't dilly-dally and the Bobs, bless 'em, don't shilly-shally as they tackle problems on a greater-than-human timescale. I can't spoiler stuff since the Anti-spoiler Activists get so stroppy about it. But I can say that there's no good reason for someone who liked the first book not to get the second ASAP and there's no reason for someone who didn't like the first book to even consider this one.

As for me, I'm on to book three and might even have bumped this one up a rating point had it not been for the clear affection and acceptance herein shamelessly flaunted for a lifeform utterly unworthy of it:


The cat’s A.I. was realistic, right down to the total lack of loyalty.