THE INVISIBLE LIBRARY, first in a YA steampunk/urban fantasy series 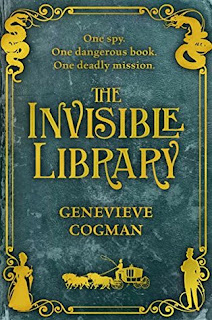 The Publisher Says: Irene is a professional spy for the mysterious Library, which harvests fiction from different realities. And along with her enigmatic assistant Kai, she's posted to an alternative London. Their mission - to retrieve a dangerous book. But when they arrive, it's already been stolen. London's underground factions seem prepared to fight to the very death to find her book.

Adding to the jeopardy, this world is chaos-infested - the laws of nature bent to allow supernatural creatures and unpredictable magic. Irene's new assistant is also hiding secrets of his own.

Soon, she's up to her eyebrows in a heady mix of danger, clues and secret societies. Yet failure is not an option - the nature of reality itself is at stake.

My Review: I want to be a Librarian.


The atmosphere of the place soothed her automatically; the rich lantern lights, the sheer scent of paper and leather, and the fact that everywhere she looked, there were books, books, beautiful books.
***
She was a Librarian, and the deepest, most fundamental part of her life involved a love of books. Right now, she wanted nothing more than to shut the rest of the world out and have nothing to worry about except the next page of whatever she was reading...
***
And then they were inside, and out of the wind, and surrounded by comforting walls and walls of books. The rich, delightful smell of old paper, leather and ink permeated the place, washing away the pettier odours of blood and oil and smog.


A high level of chaos would mean that they could expect to meet the Fae, creatures of chaos and magic, who were able to take form and cause disorder on such a corrupted world. And that was never good news.
***
A Librarian’s mission to seek out books for the Library developed, after a few years, into an urge to find out everything that was going on around one. It wasn’t even a personal curiosity. It was a simple, impersonal, uncontrollable need to know. One came to terms with it.
***
And if she’d been able to choose her options a few hours ago, being trapped in a dead vampire’s private study with an angry Fae would not have been one of them.
***
Irene sighed. “So we have an incredibly glamorous female cat burglar who slinks around in a black leather cat-suit, who kills vampires in her spare time?”


Now. Are you sold? If not, skip it and regret nothing. The rest of us who aren't dead-souled potato heads will be happily reading the five extant volumes for the sheer verve with which Author Cogman lobs twists at us.