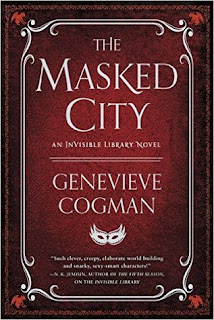 The Publisher Says: Librarian-spy Irene and her apprentice Kai are back in the second in this “dazzling”* book-filled fantasy series from the author of The Invisible Library.

The written word is mightier than the sword—most of the time...

Working in an alternate version of Victorian London, Librarian-spy Irene has settled into a routine, collecting important fiction for the mysterious Library and blending in nicely with the local culture. But when her apprentice, Kai, a dragon of royal descent, is kidnapped by the fae, her carefully crafted undercover operation begins to crumble.

Kai’s abduction could incite a conflict between the forces of chaos and order that would devastate all worlds and all dimensions. To keep humanity from getting caught in the crossfire, Irene will have to team up with a local fae leader to travel deep into a version of Venice filled with dark magic, strange coincidences, and a perpetual celebration of Carnival—and save her friend before he becomes the first casualty of a catastrophic war.

But navigating the tumultuous landscape of fae politics will take more than Irene’s book-smarts and fast-talking—to ward off Armageddon, she might have to sacrifice everything she holds dear...


My Review: An interdimensional Library, located outside the reach of Time's Arrow, hires minions to acquire by fair means or foul certain texts out there in the Multiverse for safekeeping or sequestration within its eternity-defining and -defying walls.

The idea of this series is compulsively readable to me. The experience of reading Author Cogman's thoughts about books, reading, stories and their effects and affects is addictive. But this second entry into the series suffers from a common sophomore slump in high-concept book series: The established characters have to get from one set-piece to the next somehow, and when the whole point of the story is that the core group is separated by Vast, Malign Forces, the danger of the story devolving into something that closely resembles the ghastly experience of staring into a fishtank at a rodent desperately clawing for freedom on a squeaking wheel while never making an inch of headway is very real.

Irene the Librarian (Here’s to being a secret agent of an interdimensional Library! she thinks at a crucial juncture, to my jealous loathing) runs from pillar to post attempting to save her friend/student/lust object Kai the dragon, assisted and hindered by their mutual friend Vale the detective from an alternate steampunk London. That particular alternate is the one that was introduced in the first book, The Invisible Library, which also introduced the Fae (beings of chaos) and the aforementioned dragons (beings of order). Humans fit somewhere on the fringes, the vast horde of us existing as bit players in the dramatic tales of the Fae or obedient supernumeraries in the operas of the dragons.

Except, of course, for the Librarians. The Library is a human institution that, in some kinda way, allows us mere mortals access to the Great Game played between the ancient enemies across the many, infinitely numerous in fact, alternate Earths. Since the many-worlds interpretation of quantum physics is eminently sensible to me, agreeing with my innate sense of the Universe's functioning, I totally buy in to stories with multiverses. This particular one has another thing I intuitively recognize as necessary, beings who walk among the multiverse's reality the way we walk among the many worlds in a forest without too much bother as to whose nest/food source/war we interrupt/alter/destroy.

Author Cogman endows these creatures with familiar attributes by making use of the fairy/fae label and the dragon label. These bits of shorthand are most useful. What is less appealing to me is the eternal barely-undeclared war between these camps. The idea of the multiverse as a continuum of highly ordered worlds to highly chaotic worlds again suits my perception of the reality of existence being a set of interlocking continua. But the Grand Conflict of Order and Chaos isn't that simple once humans get their little hineys off the chess board and into the ranks of players. There is no three-person chess, and there is no element of chance in chess; thus the multiverse is transformed into a game of Risk. (I think that damned game has ended more friendships than anything except sexual jealousy.)

And that's where the problems with this tale begin. Alliances form along predictable lines. They're never seriously challenged. In Risk, alliance shift and bonds rupture; here, the end game is the same as the initial conditions, the same players in the same configuration, and somehow a mere human (and a girl human at that!) has averted a Great War by talking.

Um, no. This is a series set in a multiverse that requires conflict to exist. That's not served by this resolution to this book's peripatetic-but-pointless dashings from pillar to post. This is a significant letdown in a series so fascinatingly conceived.

All that aside, I felt completely and utterly Understood by Author Cogman when I read this:


"...People want stories. You should know that more than anybody. They want their lives to have meaning. They want to be part of something greater than themselves. Even you, Miss Winters, want to be a heroic Librarian—don’t you? And if you’re going to say that people need to have the freedom to be unhappy, something that’s forced on them whether they like it or not, I would question your motivation.” She paused for a single deadly second. “Most people don’t want a brave new world. They want the story that they know.”

And that's why I'll buy the next book, and the next, and the one after that. I'm down for rough bits if the smooth is this far into my own personal story.
Posted by Richard at 12:48 PM