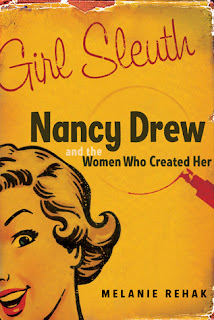 The Publisher Says: A plucky "titian-haired" sleuth solved her first mystery in 1930. Eighty million books later, Nancy Drew has survived the Depression, World War II, and the Sixties (when she was taken up with a vengeance by women's libbers) to enter the pantheon of American girlhood. As beloved by girls today as she was by their grandmothers, Nancy Drew has both inspired and reflected the changes in her readers' lives. Now, in a narrative with all the vivid energy and page-turning pace of Nancy's adventures, Melanie Rehak solves an enduring literary mystery:
Who created Nancy Drew? And how did she go from pulp heroine to icon?

The brainchild of children's book mogul Edward Stratemeyer, Nancy was brought to life by two women: Mildred Wirt Benson, a pioneering journalist from Iowa, and Harriet Stratemeyer Adams, a well-bred wife and mother who took over as CEO of the pioneering Stratemeyer Syndicate after her father died. In a century-spanning story Rehak traces their roles--and Nancy's--in forging the modern American woman. With ebullience, wit, and a wealth of little-known source material, Rehak celebrates our unstoppable girl detective.

My Review: When I was about nine, I went through a Hardy Boys phase. My mother, who went from buying Oldsmobile-priced cocktail dresses at Henri Bendel and Chevrolet-priced suits at Bonwit Teller to working three jobs to support us, never said no when it came to buying me a book. So I read my way through the catalog, and looked around for more. Mama somewhat diffidently pointed out the Nancy Drew books. I asked if she solved crimes. “Yes, and drives a blue roadster,” said the wily old girl, and I had another school year's reading at a quarter a book. (Used. We most often bought used...Mama said the words didn't wear out and who cared about the cover anyway?)

Ever after, I've had a “thing” for All-American boys and girls who just damn well do it for themselves. From such acorns....

Mystery-reading pleasure was a given. Mother and sister were big consumers of the genre. I got my own books, and they were not mysteries, but good heavens a boy can't survive on a book a week! I mean really! So I read their mysteries. I checked mysteries out of the liberry. I read all the Hardy Boys (always preferred Joe to Frank, Iola be hanged) and Nancy Drew (what a maroon Ned Nickerson was!) a couple times each. They lost their luster about the time I found good SF.

But do you ever forget that first kiss? I know I haven't. Nancy, Frank, and Joe...oh my how I treasured their orderly world. No one behaved badly (my narcissistic parents were astonishingly insensitive and ill-mannered in their divorcing) without consequences, and crimes were punished. I liked that a lot! And I still do.

Melanie Rehak apparently did, too. She set out to tell the story, public since the 1970s at least, of the origins of Nancy Drew, Girl Sleuth. All the ookie bleccchhhy part about families in conflict over Smothers-Brothers-y “dad always liked you best” and “I sit here with mom and you swan about” and so on; all the fish-out-of-water growing up of a major tomboy with a ginormous brain, in a rinky dink dink little wide spot in the road, leading to Iowa State and college degree in the 1920s; all the nasty mean greedy behind-the-scenes moneygrubbing everyone seems to have thought nothing of.

It's as good as a novel. It's as much fun as a Nancy Drew story to unravel. It's not perfect, but it's got a lot of story and it tells the story concisely, yet without leaving annoying holes or piling numbing crap all over the reader.

The focus is on Nancy, her “father” Edward Stratemeyer, her “mother” Midred Wirt, and wicked stepmother Harriet Stratemeyer Adams. That's enough for a 600pp doorstopper, let me assure you! Author Rehak got out her laser, finely cut and carefully etched the truly important bits from these three peoples' lives and then soldered and electroplated the whole thing into a lovely, solid bracelet shaped like Nancy Drew.

Even if you've never read one of these books, THIS book is a very good read, and an intriguing side window onto American culture in the mid-20th century. As a hallmark of that finger-on-the-pulse quality that Stratemyer and his heirs have always had, Nancy Drew is getting her own TV show! The long-awaited CW TV adaptation has tapped a newcomer to play Nancy Drew. Exciting news, since the CW is the logical home for a drama based on her career.