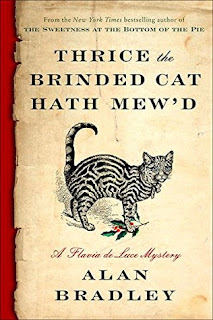 The Publisher Says: Hailed as “a combination of Eloise and Sherlock Holmes” by The Boston Globe, Flavia de Luce returns in a much anticipated new Christmas mystery from award-winning and New York Times bestselling author Alan Bradley.

In spite of being ejected from Miss Bodycote’s Female Academy in Canada, twelve-year-old Flavia de Luce is excited to be sailing home to England. But instead of a joyous homecoming, she is greeted on the docks with unfortunate news: Her father has fallen ill, and a hospital visit will have to wait while he rests. But with Flavia’s blasted sisters and insufferable cousin underfoot, Buckshaw now seems both too empty—and not empty enough. Only too eager to run an errand for the vicar’s wife, Flavia hops on her trusty bicycle, Gladys, to deliver a message to a reclusive wood-carver. Finding the front door ajar, Flavia enters and stumbles upon the poor man’s body hanging upside down on the back of his bedroom door. The only living creature in the house is a feline that shows little interest in the disturbing scene. Curiosity may not kill this cat, but Flavia is energized at the prospect of a new investigation. It’s amazing what the discovery of a corpse can do for one’s spirits. But what awaits Flavia will shake her to the very core.

THIS BOOK WAS A NETGALLEY READ. THANK YOU.

My Review: What?! ::incoherent word salad::
EDITED AFTER SLEEPING OFF INDIGNANT OUTRAGE
Yes, that's right, this book ended on a note that raised within me the Category 5 hurricane of outrage and indignation. I won't discuss what it was because it would make me utterly completely furious to know this turn of events before I got there and would, indeed, sour me on the read altogether.

Because it's a very sour thing that happens.

As is his habit, Author Bradley (that dreadful gong farmer {see text for this *hilarious* new old insult} whose misdeeds I'm not quickly going to forgive) starts with Flavia making wonderfully trenchant observations:


There are those persons, I suppose, who would criticize me for loving a chicken to distraction, but to them I can only say "Boo and sucks!" The love between animal and human is one that never fails, as it does so often among our own sorry tribe.

Thus Flavia on the first problem she encounters when returned from Canada to the loving embrace of her homeland and family. The combination of childish taunt with accurate character assessment of our species is the trademark thing this series offers. It's clearly a taste, and not everyone's favorite. I confess to needing a long break after As Chimney Sweepers Come to Dust, a most unsatisfactory entry into the series that left me disgruntled if not outright annoyed. I didn't like the silliness of the Nide and its cover story. But there one is, a long-running series must make an effort to freshen itself up if not reinvent itself or the dreaded series sag will set in.

Flavia's current case, which she must solve before the winter of 1951 ends (references are made to "His Majesty" and to Christmas, so it's before 6 February 1952 when George VI died), is the death of a strange duck named Sambridge. Flavia discovers his body in a completely unexpected way, exactly as one would expect. Being a sleuth to her core she uses her only chance to view the crime scene to observe many details but seems not to have a lot of joy from them. Her strangest find is a book that belonged or belongs to a girl with whom she's acquainted, one Carla Sherrinford-Cameron, whose ghastly pretentious artsy-fartsyness causes Flavia actual pain:


Carla Sherrinford-Cameron, her hands clasped together at her waist like lobster's claws, was singing "The Lass with the Delicate Air," and I found myself wishing that I had thought to bring a firearm with me—although whether to put Carla out of her misery or to do away with myself, I had not quite yet decided.

(That's a song I have to admit made me wince even when Julie Andrews emitted it.) But what was the dreadful Carla's book doing at the scene of old Mr. Sambridge's murder? Why was he murdered? What significance does his quite strange habit of carving weird creatures for churches have?

All in good time. This is Author Bradley's show so we'll let him elucidate his purposes in his own way and at his own pace. The usual suspects are deployed, Inspector and Mrs. Hewitt, Cynthia the vicar's wife, sisters Feely and Daffy, Dogger...all present and accounted for. New series regular, it would seem, is Mrs. Mildred Bannerman late of the Nide. Her assistance to Flavia in this case is invaluable. Why is she taking such an interest in Flavia? Is there a deeper purpose to this lady's presence in England? And what goddess placed a helper whose connections are *the*exact*ones*needed* in Flavia's pursuit of a killer?

I will say I found the resolution to the murder far-fetched and impractical, and a bit less than believable even within the heightened reality I've come to expect from the series. But the major shocker is not even to be hinted at. It is a shocker. But you'll see, series readers. Those joining the party just now: Don't start here. Nothing will make sense, none of the pleasures will please, which is a waste and a shame. Read the books in order for them to be at all worth your eyeblinks.
Posted by Richard at 6:30 AM