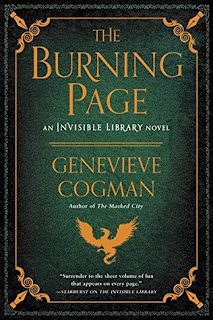 The Publisher Says: Librarian spy Irene and her apprentice Kai return for another “tremendously fun, rip-roaring adventure,” (A Fantastical Librarian) third in the bibliophilic fantasy series from the author of The Masked City.

Never judge a book by its cover...

Due to her involvement in an unfortunate set of mishaps between the dragons and the Fae, Librarian spy Irene is stuck on probation, doing what should be simple fetch-and-retrieve projects for the mysterious Library. But trouble has a tendency of finding both Irene and her apprentice, Kai—a dragon prince—and, before they know it, they are entangled in more danger than they can handle...

Irene’s longtime nemesis, Alberich, has once again been making waves across multiple worlds, and, this time, his goals are much larger than obtaining a single book or wreaking vengeance upon a single Librarian. He aims to destroy the entire Library—and make sure Irene goes down with it.

With so much at stake, Irene will need every tool at her disposal to stay alive. But even as she draws her allies close around her, the greatest danger might be lurking from somewhere close—someone she never expected to betray her...

My Review: Irene Winters is, comme d'habitude, in the stinky stuff up to her modest pseudo-Victorian neckline. We join Kai, the elegant and toothsome dragon prince and Irene's apprentice Librarian, as they receive desperate new instructions from the Powers That Be. The Library is not aligned in the power struggle between the orderly dragons and the chaotic Fae, officially anyway, but it seems that the battle is joined...many worlds not safe for Librarians (a combination of spy and thief and bibliophile...I want to be a Librarian so bad I can taste it) to traverse. Something is clearly up. Irene and Kai are damned near killed by the Something, in fact, as a door into the Library from their current assignment literally bursts into flames as they try to use it.

Well, I ask you, is there any more exciting a way to bring a reader into the book's world?! And to set the stakes as high as they can be (personal survival)? I was prepared for a rollicking good time. I got one.

Vale, Irene and Kai's good friend in the alternate London where they are stationed as Librarians in Residence, is a relatively high-chaos world...magic works, there are werewolves all over, that kind of thing...whose life is analogous to Sherlock Holmes's in Conan Doyle's novels. The poor man, in the last book, was exposed to an EXTREMELY high-chaos world while rescuing Irene and Kai. (He nurses Feelings for...well...I suspect for both of them.) As a result his morphine addiction is in high gear. Since he's using the drug to self-medicate his inner demons, it makes sense that a chaotic world would cause his turmoil to reach a boil. It does...and in the universe of these novels that means he's literally, physiologically infected with chaos, to his severe detriment. Irene and Kai are desperately worried about him, but forced to focus on their Librarian issues.

It seems that the Big Baddie of the series, Alberich, has his sights on Irene again. He wants her to join him in his war to replace the Library with his own Chaotic sphere. Failing that, he wants her dead, because she's just too adroit and clever to allow to continue opposing him. He even takes on the bodies of others, killing them in the process, to reach her.


He swept her round another turn, his hand warm on the small of her back, gloved in a dead man's skin.

Their battle runs across multiple dimensions, includes innocent and not-so-innocent bystanders, and causes Irene to do something...a desperate survival tactic in the face of imminent death...that will cause her endless nights of grief and remorse.

Kai, in this story, turns himself into his draconic form for the first time. He's magnificent as one would expect. Author Cogman describes his dragon form in lavish, luxurious terms though not at any great length. The real focus is that he has the power to fly across the multiverse! This is new, or it was to me. He takes acrophobic Irene into the space between the worlds where she can see alternate realities as if she was in a jetliner. It's horrible for her, but amazing for the reader. It becomes urgent for Kai to do this multiple times and in some very high-stress situations.

Vale, meanwhile, is sinking fast. His save-the-day actions in The Masked City are reaping the whirlwind of his addiction. He spirals deeper and deeper into depression. Vale's best friend Inspector Singh of Scotland Yard (how you can tell it's an alternate London, South Asian inspectors?! Yeah, not so much in reality) is frantic with worry. He and Kai and Irene are locked in conflict about how to save their friend, with no good options appearing and the bad ones piling up. Ultimately, the problem of how to help someone in self-destruct mode is resolved...but having known self-destructive people well, I don't entirely buy it. The ultimate resolution is one I truly wish we had a way to implement in reality.

It's an exciting ride to get to the ending, and the fact is that it's a middle book so that's not as easy as one might think. I felt that this book was a step UP from its predecessor in action and excitement. That's a good, good thing. Series reads are deeply satisfying, as I've said elsewhere. I'm a happy boy when I'm among familiar faces doing fun things while thinking interesting thoughts, and that's how series reads are at their best. I was pleased enough with the last book to read this one, but it suffered from a, well, a bagginess at the knees that wasn't a good omen. This book didn't have that issue. The action was well-grounded in the reality of the series and the characters weren't Playing Parts...which might have been the point of the last book but wasn't to my taste.

Irene and Kai and Vale emerge from this entry in the series as a stronger team and a better bunch of individuals. Their interdependence is coming clearer and making them all stronger. I'm thoroughly hooked on these reads and can't wait to get to The Lost Plot.
Posted by Richard at 6:30 AM