THE DARK ARCHIVE, seventh Invisible Library story that I want to see on Netflix soonest thank you and please 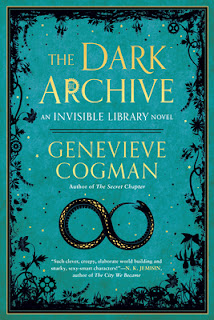 The Publisher Says: A professional spy for a mysterious Library which harvests fiction from different realities, Irene faces a series of assassination attempts that threaten to destroy her and everything she has worked for.

Irene is teaching her new assistant the fundamentals of a Librarian's job, and finding that training a young Fae is more difficult than she expected. But when they both narrowly avoid getting killed in an assassination attempt, she decides that learning by doing is the only option they have left - especially when the assassins keep coming for them, and for Irene's other friends as well...

In order to protect themselves, Irene and her friends must do what they do best: search for information to defeat the overwhelming threat they face and identify their unseen enemy. To do that, Irene will have to delve deeper into her own history than she ever has before, face an ancient foe, and uncover secrets that will change her life and the course of the Library forever.

I RECEIVED A DRC FROM ACE BOOKS VIA NETGALLEY, AT THE BEHEST OF MY GOODREADS FRIEND STEVEN. THANK YOU!

My Review: I mean! Let me sit and catch my breath for a bit. Gracious me, this one was exciting times eleven.

Comme d'habitude, Kai and Vale and Irene are in pursuit of a Book on Vale's home, and Irene and Kai's adopted favorite base-world, B-395. New character Catherine (where's Heathcliff, Author Cogman?) is a Fae (and the niece of powerful adversary Fae Lord Silver) who is to be trained as a Librarian. Hence her presence here.

But, I hear fellow fans complain, Fae can't go into the Library! They're Chaos on legs, they would be extinguished or combust or something! And you're correct, they can't. Catherine's tried with no success and a good deal of pain. Now she's on a Librarian spycrafty expedition, nursing a distinctly adolescent sense of being Hard Done By and making poor Kai pay for her inner crappy mood. Irene and Vale? Elsewhere. Being, in fact, booby-trapped into a submarine explosion and a major, major discovery. A Certain Someone is not as dead as Irene left him, and his Lady Wife seems to be ready to take on the Library to get revenge for Irene's dastardly nerve in killing him in the first place.

These are but the opening notes of the symphony. And I can assure you that the pace doesn't slacken, the chases are truly cinematic (one B-395 London library is *begging* to be filmed with its multi-story Guggenheim-esque open atrium architecture, only 18th century and marble not 1959 concrete), the characters constantly going to extremes in service of their families, their peoples (Fae, Dragons, Librarians...the odd human tempest-tost in the deep end of a cosmic pool they never suspected existed), and the Treaty that our intrepid gang damn near died to bring into effect. After all, a multiverse of opposing sides defined by antithetical modes of being needs rules or there's going to be lots of casualties.

I don't for a moment expect anyone who hasn't read the first six books to know what much of that really means. I hope you'll take this, the release day of The Dark Archive, to look over my reviews of The Invisible Library, The Masked City (alt-Venice!), The Burning Page, The Lost Plot, The Mortal Word, and The Secret Chapter to see if anything in those reviews grabs you. You know my taste by now...I don't tolerate boredom well, I don't want to read about eye-rolley majgickq that makes not one whit of sense, or kiddie-kinses as they Find Their Snowflake Selves...so you already know there's none of that here. There's also no sex, and apparently no one in the multiverse is queer (though I suspect that Vale is ace), but nothing made by humankind can be perfect.

What I look for that Author Cogman delivers book after book is a group of people whose honor is stronger than their fear, whose shared values hold them up when they're so battered by enemies they just want to lie down and rest, and whose relationships adjust to Earth-shattering new information.

That last one? That's the Big Reveal. You'll think, "oh THIS is what he was on about!" And it will most definitely NOT be. And you won't know it until a book falls on your metaphorical head and rings your bells.