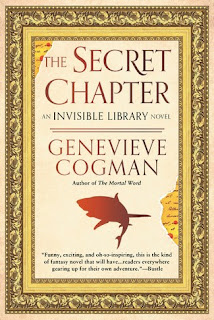 The Publisher Says: A Librarian’s work is never done, and once Irene has a quick rest after their latest adventure, she is summoned to the Library. The world where she grew up is in danger of veering deep into chaos, and she needs to obtain a particular book to stop this from happening. No copies of the book are available in the Library, so her only choice is to contact a mysterious Fae information broker and trader of rare objects: Mr. Nemo.

Irene and Kai make their way to Mr. Nemo’s remote Caribbean island and are invited to dinner, which includes unlikely company. Mr. Nemo has an offer for everyone there: he wants them to steal a specific painting from a specific world. He swears that he will give each of them an item from his collection if they bring him the painting within the week.

Everyone takes the deal. But to get their reward, they will have to form a team, including a dragon techie, a Fae thief, a gambler, a driver, and the muscle. Their goal? The Kunsthistorisches Museum in Vienna, in a early twenty-first century world, where their toughest challenge might be each other.

I CHECKED THIS BOOK OUT FROM MY LOCAL LIBRARY. SUPPORT YOUR LIBRARY!

My Review: Glory be. This is an *epic* tale, taking us mere humanses out to the Deep End, tilting the deck, and saying, "whoopsie-daisy, hope y'all can swim!"

More thoughts after I can remove the oxygen mask and IV fluids the paramedics put on me. (That was written at the end of March after COVID withered my body and rattled my brain.)

Imagine meeting your intended's parents after rescuing her, being rescued by her, heisting multiple valuable items together, negotiating Multiversal Peace with her, and having them be like "~meh~ that's just life as a Librarian. Oh BTW there are some facts we've never told you, daughter dear, and there's this job...." Was it that surprising that a daughter of spies had developed trust issues? {Irene} thought wryly, as Author Cogman puts it. In conversation with her mother later: “Life was much easier before I had to worry about everyone else worrying,” Irene muttered. “It’s called growing up, dear. It comes with staying alive.” And that the extent of Mothering the lady can do! But "everyone else" includes a certain deeply treasured Dragon....

Kai, who is but a minor royal among Dragons in the Invisible Library's multiverse, isn't faced with many things that challenge him. His evolving relationship with Human Irene Winters is one. He loves Irene. Irene loves Kai. They are both fond of Peregrine Vale, largely absent from this book because they're spending most of their time in an alt-Vienna he can't be of much practical help in. They both fret a bit about him...I suspect Kai has a little crush on Vale...but there's a job to do and they needs must attend to the doing of it or Doom Will Follow!

You know, I actually believe it will, every time I read one of these delights. A somewhat cynical Dragon character says:


"... Our so-called history is a shared fiction, agreed to keep those who are in power where they are. There is no such thing as genuine truth, only received truth. The winners write the history books in all cultures, as it serves their advantage. Parents tell their children the stories which paint them as heroes. Enlightened self-interest is the best that anyone can hope for."

It's this level of insight and truth-telling that makes my suspension of disbelief function as smoothly as a Citroën's does. I know that Author Cogman sees the world as I do: "They did attempt to leave the European Union last year, but apparently that was prompted by demonic interference. A lot of politicians were subsequently tried for treason and beheaded at the Tower of London." Yes indeed. And from Cogman's keyboard to Nemesis's inbox.

What made this story stand out in my mind, plague ravaged though it was, was the main Big Reveal (there were several) about something I'd wondered if I twigged aright way back when Kai first began his Librarian training under Irene. The Dragons, no less than the Archetype-swiping chaotic Fae, want the Multiverse to bend into shapes they decide. There is a way that could happen; the story here brings it forward.

Irene will have to factor this huge revelation into her dealings with all sides. It's something she can't ignore as the Library's representative to her demandingly negotiated peace treaty...with the seductive, charismatic Lord Silver appointed as the Fae representative and who else but Kai as the Dragon representative...and still maintain the Library's vaunted neutrality. Without betraying the confidence of any of the sides to this attempt to reduce violence in the Multiverse.

Here it is, then. Six books into a long series (or so I hope) the stakes, until now personal survival at the forefront, have become so much more complicated and so much more fragile. And Irene's Librarian point of view, expressed simply and clearly, matches my own and reinforces the passionate interest I take in volume seven (due out the 29th of this month!):

“Stories matter - telling them, sharing them, preserving them, changing them, learning from them, and escaping with and through them. We learn about ourselves and the world that we live in through fiction just as much as through facts. Empathy, perception and understanding are never wasted. All libraries are a gateway into other worlds, including the past - and the future.”