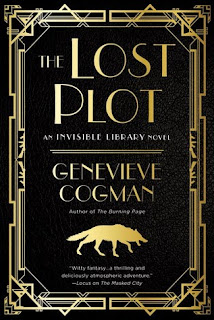 The Publisher Says: After being commissioned to find a rare book, Librarian Irene and her assistant, Kai, head to Prohibition-era New York and are thrust into the middle of a political fight with dragons, mobsters, and Fae.

In a 1920s-esque New York, Prohibition is in force; fedoras, flapper dresses, and tommy guns are in fashion: and intrigue is afoot. Intrepid Librarians Irene and Kai find themselves caught in the middle of a dragon political contest. It seems a young Librarian has become tangled in this conflict, and if they can't extricate him, there could be serious repercussions for the mysterious Library. And, as the balance of power across mighty factions hangs in the balance, this could even trigger war.

Irene and Kai are locked in a race against time (and dragons) to procure a rare book. They'll face gangsters, blackmail, and the Library's own Internal Affairs department. And if it doesn't end well, it could have dire consequences on Irene's job. And, incidentally, on her life...

My Review: Quite extraordinary. This is a high-stakes story within the Invisible Library series. Many, many things have changed since book one and in this story the changes truly come home to roost in the attic. Action, excitement, and several passages of astonishing violence are the key drivers of events down surprising channels.

It isn't often that I finish a series read, immediately procure the next, and devour that one in a day. I did that for this series because I am besotted with the idea of the Library and its multiverse-trotting spy/burglar/diplomats the Librarians. I am even, if you can believe this!, completely okay with the presence of magic in the series.

I who lift my brow, crinkle my nose, draw my lips into a sneer, at the merest whiff of majgickq, actually *approve* of the system invented and presented in this series. It's actually inexplicable to me that I am not having literary hives every time the Language is used and at each Fae sighting. What has happened to me? I'm putting it down to the revolting fact, recently revealed to me, that I share an ancestor with *gag* Tom Cruise *retch*, which blow to my self-esteem causes me spiritual pain.

The story in this book is, from the opening scene, one of peril and menace to Irene. She is most often alone to face her adversaries. Kai is, as a developing theme in the series, going to have to learn to take action on his own behalf. Irene's worries that she isn't teaching him the skills she possesses so much as grooming him as her sidekick have been woven through the stories. It's a sign of the character's deeply seated identity, created by a talented and careful author. I buy into the characters's reality in this really quite daft alternative view of reality because Author Cogman spent the time to think through these small moments of self-reflection.

The main action takes place in a Prohibition-like New York after Irene and Kai land in the ruins of a library in Boston. Readers of the previous book will appreciate the emotional impact of this venue, and readers in general will share the appalled horrified revulsion that Kai and Irene express at the idea of a soul so bereft of respect as to perpetrate vandalism on a library. (As an aside, I note that [author:Susan Orlean|45374] just published [book:The Library Book|39507318] which non-fictional take on the subject I ended up abandoning as it was too painful to continue reading.)

The local mob boss, Giorgio Rossi aka George Ross, has a lady sidekick-cum-enforcer, Lily. Lily knows who, more accurately what, Kai is on sight. That's because Lily is Fae, and despite her chosen position as murderous muscle for the mob, is really the brains of the crime boss's operations. Irene's somewhat bizarre (and wholly unintentional) cover identity as an English crime boss visiting New York to drum up new business piques Lily's interest.

Crime boss Irene is hunting a vanished Librarian straight into the clutches of two dragons operating without sanction in this bizarre, lawless New York. They're aiming to win an internal political battle by supplying their dragon queen with a special alternative edition of an ancient Chinese novel. (She's interested in a re-read of this novel, a fondly remembered diverting entertainment from her past. That procuring this book for her amusement causes numerous deaths and a vicious war between her subordinates is...uninteresting.) Irene's hunted Librarian, Evariste, is doing his dead-level best to accommodate one of the dragons by procuring the book because his daughter is being held hostage by the dragon's clever henchman. Kai and Evariste, separated from Irene, go off and procure the desired book...but who receives it and how aren't in the least sure until the moment the event occurs.

The climax of the hunt for the book, for Evariste, and for justice (and Justice) takes place in the Court of the Dragon Queen. As always when the extremely Order-centered dragons are involved, there is a price to pay for the lies one tells, and a price to pay for telling the clear, unmuddied truth. Justice and fairness each have their innings, though neither one takes the field in unsullied glory at the end of the proceedings. The guilty...everyone is guilty, that's the nature of the world, the multiverse in fact, but here we mean "those whose actions and inactions caused irreparable harm" by it...suffer, and the wronged are made as whole as Justice can make them. Irene is required to suffer her personal agonies in the search for and service of Justice served to violators of Order.

But there is, as there always is, a reason in Author Cogman's relentless and grinding tale of Truth's victims. And it makes the ending of this book so very, very special. I seldom laugh with exuberant happiness as I read endings. That is exactly what happened here.