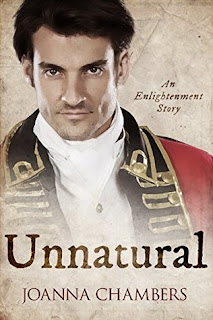 The Publisher Says: Captain Iain Sinclair has looks, charm, military honours—even the favour of the king himself. He has everything—everything, that is, except the friendship of the one man whose good opinion he has ever cared for, scientist, James Hart.

James has loved Iain all his life, but after the last disastrous encounter between them, he vowed to accept no more crumbs from Iain’s table. If Iain cannot be the lover James wants, then James will have no more to do with him.

Disenchanted with his career, and miserable without James in his life, Iain decides to leave military service and embark upon a new career in India. Before he leaves England behind, though, he is determined to try one last time to reconcile with his dearest friend.

An invitation to a country house party from James’s sister provides the perfect opportunity to pin James down and force him to finally listen to Iain’s apology. But when Iain discovers that an apology is not enough—that James is not willing settle for less than a lover—he is forced to reconsider everything: his life, his future career, and most of all, his feelings for James.

My Review: A series that ends with a secondary character's starring role in a series novel is a very strong series indeed. This book takes a character from book 2 of the main series, Enlightenment, and gives him a star turn. Captain Iain Sinclair is King George IV's aide-de-camp, responsible to the newly enthroned Prinny for managing the flow of people seeking his attention all the while serving his army masters as a spy on His Pathetic Majesty's private life and thoughts.

Characteristically for the charismatic and unprincipled Iain, it's the tedium and not the moral questionability of his job that drives him to resign his commission in His Majesty's Army. Dealing with the Royal Twit's sulks, tantrums, and crotchets makes Iain crazy. He does it for three years because he's ashamed to let go of the army career that has enabled him to feel his father's mildest, most conditional affection every once in a way.

You see, Iain had the bad taste to be gay. He's a younger son, so there aren't dynastic consequences. But his father, already disappointed in his own life, puts extra weight on Iain and feels he was sorely let down by him on a horrible occasion back before discovering the lad's gayness. He speaks awful, hateful words to his son, and essentially does his dead-level best to be hateful and terrible to him as often as possible. This is made easier for "Father" Dear as his personal and familial disappointments are constantly laved in the (un-)balm of alcohol. Iain is only slightly redeemed by his Army commission and his tales of derring-do in battle.

But then the Napoleonic Wars end. Being an aide-de-camp to the King...well...not quite so exciting as battlefield stuff, though goddesses know that most fathers of that era would be kvelling over their son's closeness to the Royal Person. Not Iain's, no indeed. Where does Iain turn for his affections to be returned?

His best friend, the younger but more intelligent James Hart. Jamie has hero-worshipped his dashing, sophisticated older friend most of his life. Their mothers and older sisters are fast friends. Their proximity and their mutual admiration lead the usual places for young gay boys in the country with no other objects of desire. But only after the older Iain has some experience under his belt, having been away in the Army and all. And James gets a first-hand look at what Iain has learned! Mind=blown.

So what if Iain isn't the marrying kind and his country mouse is?

When we meet Iain in the series universe it is as a fellow debauchee of starchy David Lauriston's rakehell true love, Lord Murdo Balfour. The King's Scottish tour was organized to keep the fat old fool busy while the *real* governing class gets on with drawing a plan to keep peace and foster stability in all of Europe. (It was remarkably successful.) The fool's progress through Scotland was Iain's worst nightmare and his resignation came shortly after it was over. Iain is still hurting from James' inability to be just friends with the man he loves and idolizes. After one truly gorgeous lovemaking session, a romantic and loving scene described by Author Chambers in her trademark spare and evocative style, Iain has severe collywobbles and runs away, comme d'habitude. James is...done, through, out of patience with his beloved's assholish behavior, both at that moment and later when James runs Iain to ground to have it out with him in fashionable London's bordello of choice for sodomites. (Doubly funny since the sin of the Sodomites was lack of hospitality to strangers, and what could *possibly* be more hospitable than a bordello?! That lack of the hospitable spirit's why ol' Yhwh rained fire and brimstone down on 'em. Look it up! It's right there in that Bible the homophobes beat us up with.)

This novel's structure shifts points of view between the men as well as time-shifts between past and present. That can feel a little seasick at times. There is one section of the men at a fight that I skimmed...I don't like boxing...plus it went on a bit long. But in the moments that make the series of novels work, the quiet and private moments of two young men flouting every tradition and every custom they've been raised to uphold and revere, Author Chambers delivers the goods and then some.

There is a love nest scene...the young men coming into a prepared love nest for the first time...that made me smile as wide as anything I've ever read. There was an al fresco scene that caused a mild attack of the vapours. There was a moment between two siblings that made me sadly aware that very few gay people in this country, and in this world, have real families. There were deeply affecting scenes in almost every chapter (every if you're more boxing tolerant than I am). This is an historical novel with gay main characters, though, and make no mistake. Romantic yes, romance no. It's closer to a romance than the main trilogy, which I'd call a long historical novel, is, but still not enough of the beats of a genre romance are there for that subset of readers.

I went into the read expecting that to be the case so I was not jolted by the lacks and absences. If you'll set aside romance novel ideation and think of the books as historical novels, I suspect you'll thoroughly enjoy the reads.
Posted by Richard at 8:30 AM