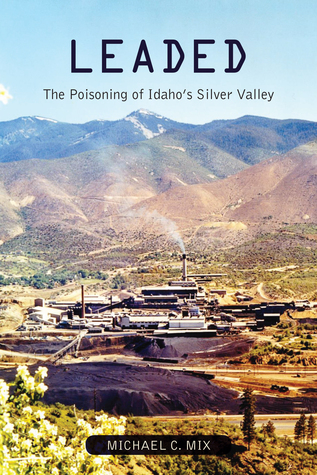 The Publisher Says: Leaded is a timely and deeply researched account of one of the largest environmental disasters in western US history. It examines the origin, evolution, and causes of the harmful environmental and human health effects caused by mining operations in Idaho’s Coeur d’Alene Mining District—the “Silver Valley”—from 1885 to 1981. During that period, district mines produced over $5 billion worth of lead, silver, and zinc. The Bunker Hill Company dominated business and community activities in the district as owners and operators of the largest mine, lead smelter, and zinc plant.

During the first half of the twentieth century, industrial mining operations caused severe environmental damage to area waterways and lands from releases of sulfur gases, lead, and other toxic metals. Damaging human health effects were evident soon after the smelter opened in 1917, when Bunker Hill workers suffered from lead poisoning. Despite the obvious devastation, due to the influence of the mine and lead industry in state and federal politics, as well as scientific uncertainties about pollution effects, no effective federal laws regulating mining and smelting operations were passed until the 1970s.

In 1974, uncontrolled Bunker Hill lead smelter emissions led to the worst community lead exposure problem in the United States and resulted in a widespread lead poisoning epidemic of Silver Valley children. In response, the Environmental Protection Agency ultimately mandated federal air lead standards. At the same time, the National Institute for Occupational Safety and Health passed national standards reducing allowable occupational lead exposures. Bunker Hill could not meet the new standards, which was a major factor in forcing the company to close, leaving behind a contaminated geographic area that was classified at the time as the largest Superfund site in the United States.

Leaded will resonate with anyone who is concerned about the long-term effects of industrial pollution, as well as students of environmental history, western US history, mining history, environmental ethics, and environmental law.