THE BODY ON THE BARSTOOL, a charming cozy murder mystery 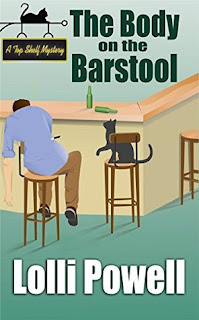 The (Self-)Publisher Says: New Yorker Erica "Ricki" Fontaine's ne'er-do-well uncle has dropped dead and left her a dive bar in a small Ohio River town. With a lousy apartment, less-than-promising job prospects, and even worse romantic ones, the inheritance comes at just the right time. Ricki packs up her cat and heads for the Buckeye State.

Now she's trying to change the Top Shelf from a bar known for its Friday night fights into the kind of drinking establishment where you can bring your granny. But finding her ex-husband dead on a barstool at opening time one morning just might put a kink in those plans.

My Review: I knew this series was for me when I read that the author lived with three or four dogs. I feel a little betrayed that the c-a-t in these books is presented in a favorable light, but one can't have everything. I'm not quite sure why that should be, but there it is.

When Ricki returns to (fictional) Waterton, Ohio, after a stint there as a child in the middle 1990s, she does so as a woman of property, a caryatid of the community, her late uncle's heiress and new owner of a dive bar called The Top Shelf. It's run-down, it's crappy, the police know it by heart, but it's all hers. She's thrilled because her life in New York City was stale as hell. Her college romance drifted into marriage that, sadly, proved not to be right for either of them...her ex-husband Michael remarried after the divorce, tastelessly quickly, to his secretary the Hot Scot. Andy the Hot Scot. So yeah, not really right for the first spouse.

After landing up in Waterton, Michael and Ricki stayed friends and even continued to talk. So it was a huge surprise to Ricki when Michael shows up unannounced at the Top Shelf. Especially since he's dead. Inside her closed and locked bar. With one of her food service steak knives in his side.

Don't you hate when that happens?

Lolli Powell's rollicking ride to resolving this mystery, and the even deeper and scarier mystery at the heart of the murder, is full of surprises and chuckles and relatable moments, just like you want a cozy to be:


I enjoy a good horse race from time to time, but team sports make me yawn. Probably has something to do with the fact that I'm about as coordinated as a legless pig and was psychologically traumatized by always being picked last for teams in gym class.

Also present are the requisite cast of oddballs and eccentrics one requires to be cozy and the employed good-looking heterosexual single men (ha! as if) in this one-stoplight town required for it to be chick lit.

There are a few inevitable holes in the quilt. The characters are numerous so some have little screen time. The red herrings piled up a bit high, though the fishy smell was never quite overwhelming. There's a timely Act of God that did cause my eyes to roll just a widge. The aforementioned Limb of Satan is not dead by the end of the book or there'd be fractionally more stars here. But none of these minor infelicities are remotely big enough to be deal-breakers.

We know the tropes are present. This is good. We know the murder has layers, we know the herrings are red and copious, we know the setting is exotic. (Ohio? There are people there?) We know, in short, all the elements of a satisfying read are present. And having just read the book, I vouch for the satisfactions of the read. I appreciate the chance to look at the world from a front porch once in a while. That's the secret of cozies, they afford a sense of community and connection not always readily available in the real world. Mysteries in general offer a reinforcement of the frequently absent sense that Justice will prevail.

Doesn't sound like your cuppa? Pass on. The world will keep spinning. But I say take a side trip and visit the Top Shelf for a refreshing Jim Beam and soda.
Posted by Richard at 6:30 AM