METHLAND: The Death and Life of American Small Town, votes have consequences and not all good! 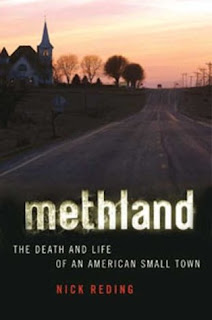 The Publisher Says: The dramatic story of the methamphetamine epidemic as it sweeps the American heartland a timely, moving, very human account of one community s attempt to battle its way to a brighter future.

Crystal methamphetamine is widely considered to be the most dangerous drug in the world, and nowhere is that more true than in the small towns of the American heartland. Methland tells the story of Oelwein, Iowa (pop. 6,159), which, like thousands of other small towns across the country, has been left in the dust by the consolidation of the agricultural industry, a depressed local economy, and an out-migration of people. As if this weren t enough to deal with, an incredibly cheap, longlasting, and highly addictive drug has rolled into town.

Over a period of four years, journalist Nick Reding brings us into the heart of Oelwein through a cast of intimately drawn characters, including: Clay Hallburg, the town doctor, who fights meth even as he struggles with his own alcoholism; Nathan Lein, the town prosecutor, whose caseload is filled almost exclusively with meth-related crime; and Jeff Rohrick, a meth addict, still trying to kick the habit after twenty years. Tracing the connections between the lives touched by the drug and the global forces that set the stage for the epidemic, Methland offers a vital and unique perspective on a pressing contemporary tragedy.

My Review: The major take-away of this book, for me at least, was to explain something I've been at a complete loss to comprehend: The virulent, violent hatred of Immigrants by the Trumpanzees. Racism makes no sense to me...I hate a person, not A People...but its prevalence in what I don't accept as the Heartland, more flyover country, attests to its power. But why?

It's not their skin color, or their accent, those are things that familiarity will wear down to nubs in a remarkably short time. Say a generation. My father still made fun of Italians and Poles; I can't pick an Italian-American or Polish-American out of a lineup.

It's not that they're taking our jobs. That's misdirected class warfare, and can almost always be redirected against the vile perpetrators of the crime of job theft after a few months of patient and factual discussion.

It's the lawlessness of the Mexican Drug Trafficking Organizations and their enforcers. All Mexican. All brown skinned and all Spanish speaking. The roundups and the crimes and the staggering cost of the drugs' prevalence in an area of little to no economic opportunity, coupled with the lack of other, countervailing examples of good, law-abiding, tax-paying people of the same ethnicity and skin color and language family, make the only experiences the Trumpanzees have negative to cataclysmically horrible ones.

During Prohibition, the wine-drinking Italians became bootleggers as the idiotic and useless Volstead Act drove demand for the high of alcohol underground. Others were in the game as well, of course, but the Italians used their cultural priority of family-before-others to create and run a lucrative industry supplying Americans with their hooch. Bathtub gin blinded people. Straight-up wood alcohol killed people, despite being cut with water and flavored with gawd-knows-what. People still got high because the Depression was on and the world was horrible and this guinea down the road could hook you up with some oblivion for a dime.

Does a pattern become apparent here? People want, maybe even need, to get high. There's always a way, and there's always a law against it. Which makes satisfying the need profitable, which attracts the disenfranchised (often immigrants), which leads to stigmatization then outright calumniation and scapegoating.

Corporate capitalism.
Posted by Richard at 6:30 AM