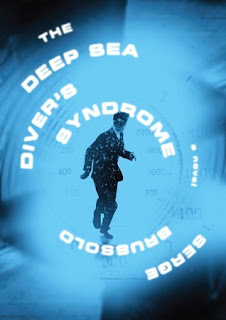 The Publisher Says: They call them “mediums”—professional dreamers who “dive” into the dream world to retrieve items that are converted into valuable artworks in the waking world. What’s more, the more dangerous the dream, the more valuable that artwork becomes.

In David Sarella’s dreams, he’s a professional jewel thief. With the help of his beautiful accomplice, Nadia, he breaks into jewelry stores and museums, lifts diamond necklaces and priceless art, and escapes into the night on a motorcycle—often, with the police shooting at them.

But the pressure is always on David to dream up more audaciously dangerous heists. And meanwhile, the dives are taking their toll, both physically and mentally. David is beyond the point at which this “syndrome” forces most mediums to retire or face insanity or even death . . . and yet he can’t imagine full-time life in the waking world, a world with no Nadia . . .

And so he decides to go down one more time—on the deepest dream-dive he’s ever attempted—to settle his doubts and pull off one last spectacular job . . .

I RECEIVED A READING COPY FROM MELVILLE HOUSE VIA EDELWEISS. THANK YOU.

My Review: Author Serge Brussolo has finally appeared in English! His series of novels about David Sarella is extensive, and this is not the first of that series, but it's a very deep (haw) and involving tale. First things first: This is a charming urban fantasy. To market it as science fiction is to court disappointed readers. A man who deep-dives into his own brain to produce Art is not a usual SFnal conceit. The action, such as it is, isn't SFnal. It's a beautifully made interior novel set in a fantastical urban world, so buy it with that in mind.

I strongly urge you to buy it, mind, especially if you like Ursula K. LeGuin's work. It's the same sort of appreciate-on-several-levels story. In the mood for escapism? Focus on David's journeys into his head, and the way he searches for meaning when he's forced to remain in "reality." Want a brainy story about the nature of reality, its discontents and escapes? Focus on the relationships David has with every living woman he's around. Brussolo layers his myth-making like fine mille-feuille pastry dough, creating the crispest and richest napoleons you'll eat this year.

In the end, my problem with this book came down to something I suspect is in the original French but that I wish the translator had used his artistic license to change: No one simply says anything, they murmur or grate or coo. Fine, fine, I get that sometimes a word like that can act as a spicy overnote. But too many times and it becomes the only thing one experiences, the fine and full flavors under the spice get obscured and that really is a shame. Author Brussolo has collected fine ingredients and made them into a full-bodied potage; a quarter cup of Tabasco reduces his ideas to mere chunks of heavier stuff in a mouth-burning stew.

There are dozens more Brussolo titles untranslated in multiple genres. It is a shame you're not already gobbling them down. Show the publisher that there are buyers with sophisticated tastes that need sophisticated tales to sate them. Resist the widespread US-market apathy for words written by those not from our culture! Treat yourself to your first Brussolo, then you'll need more and soon.
Posted by Richard at 6:30 AM