A POSITION IN PARIS, romantic historical novel with gay leads 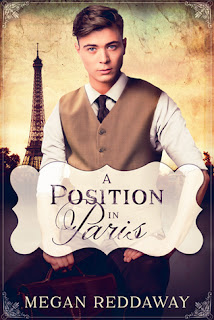 The (Self-)Publisher Says: Paris, 1919. World War One is over, and wounded hero James Clarynton is struggling to face life without one leg, one eye, and the devilish good looks he had before the conflict. Now he must pay for affection, and it leaves him bitter. He’s filling the time by writing a book—but it’s the young man who comes to type it who really intrigues him.

Edmund Vaughan can’t turn down the chance to be secretary to the wealthy James Clarynton. He’s been out of work since the armistice, and his mother and brother depend on him. But he has secrets to hide, and the last thing he wants is an employer who keeps asking questions.

As they work together, their respect for each other grows, along with something deeper. But tragedy threatens, and shadows from the past confront them at every turn. They must open their hearts and trust each other if they are to break down the barriers that separate them.

I RECEIVED A REVIEW COPY FROM THE PUBLISHER VIA NETGALLEY. THANK YOU.

My Review: It distresses me a bit that this is marketed as a gay romance. The genre's stalwart legions of readers are going to come away disappointed because this is an historical novel, not a romance. The men at the center of the tale fall in love and overcome absurdly bad communication exacerbated by pride and fear. That's not enough to be called a "gay romance" in today's marketplace. There's zero on-page sex. None. Zip zero rien nada. So buyer beware.

What you will receive for your dollars is a well-written and historically accurate vision of post-World-War-One Paris. What you will experience, via the journal entries of the two men whose love story this is, is a wonderful and tender story of falling in love and finding your soul mate. In a time when that was both forbidden and fraught with peril, that is a whole lot to find.

The French have always had a more-or-less indifferent response to gay male love. Tuts and frowns and lack of inclusion are a far cry from the English-influenced countries' thundering condemnatory revilement, torture, and murder. These English folk, arrived in an oasis of rational thought, bloom as far as they'll allow themselves to bloom. James, our war hero, is wealthy and has inherited still more of the world's goods with the death of his gay great-uncle. An apartment, a carriage, a lifestyle of enviable luxury; younger and poorer Edmund has less, needs more, and hides a genuinely tragic stain on his family's character from his war-hero employer.

Needless to say, the entire fakakta mess could be solved if the men would ask direct questions and answer them truthfully, but then again that's the entire problem in the human world. Politics is the art of obfuscating the essential simplicity of human troubles so a few can steal money and value from a lot. But I digress.

James's personality, unsurprisingly, is dominant and take-charge. Edmund is more retiring yet more stubborn and prideful than James is accustomed to dealing with as an aristocrat and an officer. Edmund's idiotic pride presents an enormous obstacle to James, smitten and eager to help his beloved. Quite unsurprisingly, James isn't particularly aware of his overbearing and domineering personality's effect on lower-class, shy Edmund. While it is true that Edmund's idiot pride is the major stumbling block to their communication, James's lack of experience with equality in his relationships needs addressing as well.

These problems being universal among human beings, they're deeply relatable to relationship fiction readers. I fear that placing two men at the center of a relationship fiction, the author won't find those readers; I've already mentioned the issue with the romance readers' expectations. So the resolution to the tale, one that involves an astonishing and moving act of bravery on James's part, is perfectly designed to appeal to an audience I fear will not notice the book.

There is so much to love in the story of two proud, scared, stubborn hearts coming to love each other, to care for and about each other, to form a solid and (one expects) enduring partnership, that I wish I could open your eyes to the reality of the tale's market position. Don't go in expecting A Romance. Go in expecting Romantic Relationship Fiction a la Georgette Heyer or Margery Sharp. Your expectations will be met.
Posted by Richard at 6:30 AM