THE PLOT, a title that explains but doesn't do justice to a fabulous summer read 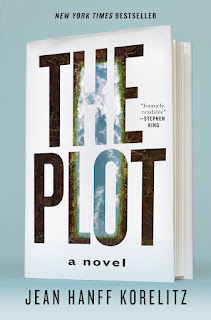 The Publisher Says: Jacob Finch Bonner was once a promising young novelist with a respectably published first book. Today, he’s teaching in a third-rate MFA program and struggling to maintain what’s left of his self-respect; he hasn’t written—let alone published—anything decent in years. When Evan Parker, his most arrogant student, announces he doesn’t need Jake’s help because the plot of his book in progress is a sure thing, Jake is prepared to dismiss the boast as typical amateur narcissism. But then . . . he hears the plot.

Jake returns to the downward trajectory of his own career and braces himself for the supernova publication of Evan Parker’s first novel: but it never comes. When he discovers that his former student has died, presumably without ever completing his book, Jake does what any self-respecting writer would do with a story like that—a story that absolutely needs to be told.

In a few short years, all of Evan Parker’s predictions have come true, but Jake is the author enjoying the wave. He is wealthy, famous, praised and read all over the world. But at the height of his glorious new life, an e-mail arrives, the first salvo in a terrifying, anonymous campaign: You are a thief, it says.

As Jake struggles to understand his antagonist and hide the truth from his readers and his publishers, he begins to learn more about his late student, and what he discovers both amazes and terrifies him. Who was Evan Parker, and how did he get the idea for his “sure thing” of a novel? What is the real story behind the plot, and who stole it from whom?

I CHECKED THIS BOOK OUT OF MY LOCAL LIBRARY. USE THOSE LIBRARIES! THEY NEED OUR PATRONAGE TO SURVIVE.


All he had ever wanted was to tell—in the best possible words, arranged in the best possible order—the stories inside him. He had been more than willing to do the apprenticeship and the work. He had been humble with his teachers and respectful of his peers. He had acceded to the editorial notes of his agent (when he’d had one) and bowed to the red pencil of his editor (when he’d had one) without complaint. He had supported the other writers he’d known and admired (even the ones he hadn’t particularly admired) by attending their readings and actually purchasing their books (in hardcover! at independent bookstores!) and he had acquitted himself as the best teacher, mentor, cheerleader, and editor that he’d known how to be, despite the (to be frank) utter hopelessness of most of the writing he was given to work with. And where had he arrived, for all of that? He was a deck attendant on the Titanic, moving the chairs around with fifteen ungifted prose writers while somehow persuading them that additional work would help them improve.

When your first novel comes to the attention of the Great and the Good of the literati, your foot's on the next-up rung of The Ladder. Jake Bonner's first, The Invention of Wonder (I'd buy that book, great title!), gave him that boost. But his sophmore slump, Reverberations, was (sad to say) so very very complete a failure that no one would give him a chance at a third. Any crack at redemption in the marketplace vanished. Disappointed critics and readers are unforgiving...ask the silenced wunderkinder. Oh...you can't...they're obscure now.

So here it is, laddies and gentlewomen, all of it...the petty, the ugly, the desperate parts of le monde littéraire as the early 21st century knows it. The feuds are titanically operatic, and over small enough things that we, in our less-than-private hells documented every which way we can get them to be seen and/or heard by strangers, should really have much better sense than to imbue with the seriousness we do. Jake's in an ugly position: He needs to make his bills:


But no guest-writer had ever acknowledged Jake’s professional achievements, let alone drawn inspiration from his success in the field they supposedly hoped to enter. Not once in three years. He was as invisible to them as he had become to everyone else.

Because he was a failed writer.

Jake gasped when the words came to him. It was, unbelievably, the very first time this truth had ever broken through.

He's possessed of a juicy idea: No one owns ideas, no matter how one comes across them:


He had no thought of anything but this story, which was none of the great plots—Rags to Riches, Quest, Voyage and Return, Rebirth (not really Rebirth), Overcoming the Monster (not really Overcoming the Monster). It was something new to him, as it would be new to every single person who read it, and that was going to be a lot of people. That was going to be, as his terrible student had so recently said, every book group, every blogger, every person out there in the vast archipelago of publishing and book reviewing, every celebrity with a bespoke book club of her own, every reader, everywhere. The breadth of it, the wallop of it, this out-of-nowhere and outrageous story.

He has the chops to execute the idea: What's stopping you?


To Jake, the word that comprised the relationship between a writer and their spark was “responsibility.” Once you were in possession of an actual idea, you owed it a debt for having chosen you, and not some other writer, and you paid that debt by getting down to work, not just as a journeyman fabricator of sentences but as an unshrinking artist ready to make painful, time-consuming, even self-flagellating mistakes.

So there we have it: A man with ambitions and a modicum of talent out to milk the System. What ever could go wrong.

Someone who knows he didn't think up this plot could go very far to damaging his credibility...or could they, really? He didn't steal someone else's work. He used the details of something he was freely told in a work of fiction. I can't think of a single example of that in modern fiction, can you?

My real point, facetious asides aside, being that it's done the books whose sources were, um, less than pure absolutely no harm for this information to come out. When I was a sprog, there was a great deal of to-do about Grace Metalious writing a nasty, tell-all scandal of a book called Peyton Place. Shock and recrimination attended the publication because her native town complained about how they were portrayed. It was so sudsy and such a whang-dang-doodle of a story...affairs! bastards! drunks!...that you couldn't see for the lines of folks waiting to hand their $5 to the cashier at Macy's. (Bookstore chains were a thing of the future in the 1950s and 1960s.) Then, of course, Hollywood came calling. Then came fame and money and alcoholism and death...all of it because the prudey world of 1950s publishing couldn't believe people would buy this crap by the ton.

So the truism "there is no bad publicity" was proven yet again to be an eternal verity.

And, corollary to that proverb is "be really careful what you complain about." Does A Ladder to the Sky versus Less ring a bell? Keep shtumm if you don't want your dirty laundry laid out...and the noxious dead guy that Jake, um, allowed to inspire him shall we say, didn't have much chance to learn that. But now here's Jake getting privately messaged about how he's a thief, with just enough detail to make it a credible accusation. But the originator of the idea's dead; can't be him...no one else could know. And he knows he didn't spill the beans....

Okay, so there's where I end my plot discussion. The events of the book need to be brought to your attention by Author Korelitz. I've got nothing but praise for how the pacing is handled. I'm not going to fault a single line, because as a line-by-line reading experience, this is a polished one. I can't say a bad word about the way the reader is brought into the main action of the book. Almost all my rating's glee resides, though, in the supremely assured and deeply wicked skewering of the publishing/entertainment world. Flawless. Fabulous. Fun.

So where's those one-and-a-half stars that make up five? Lost to some major issues. This plot, the one that's absolutely NEW and UNIQUE, is Grey Gardens meets Carrie. The actions of one character in particular are both calculating and foolish...one totally understands the desire for material gain that motivates the eventual malefactor, but the degree of planning and calculation necessary to execute this plot are OTT from my view. Is the criminal a sociopath or psychopath, to respond to something that just is not all that heinous an infringement of life, liberty, and the pursuit of happiness in such a disproportionate manner? And one knows this is not the criminal's first crime...so, well, it really sapped my pleasure in the preceding exciting story. (Also, this identity reveal was not quite the surprise it's played up to be.) I'm not asking that the book be restyled into a psychological thriller instead of a chase tale. I'm just not convinced that, on the evidence I saw on the page, the response of the malefactor made sense absent something...extreme...in what Jake did.

Still, the pages flew and the story unfolded without a single wasted word or gesture or trope. It is deft and assured and downright sudsy, and the film needs to star Reese Witherspoon and Ryan Phillippe.